I Will Sing Unto The Lord CD 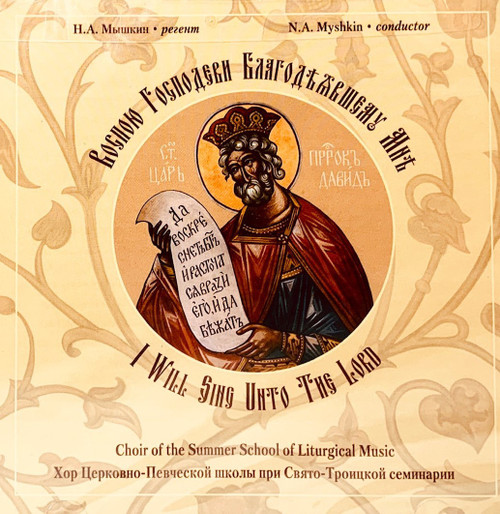 I Will Sing Unto The Lord CD

The Russian Orthodox Choral tradition of the Moscow Synodal School shines forth in ‘I Will Sing Unto the Lord’. It was produced in honor of the fifteenth year anniversary of the Summer School of Liturgical Music at Holy Trinity Seminary in Jordanville, New York. This disk features the singing of the school’s best graduates.

Nikolai Myshkin, choir director of the Moscow church of the Kazan Icon of the Mother of God in Kolomenskoe, directed the choir for this recording, which also features solos by the school’s founder, Archpriest Andre Papkov and by soprano Irina Mozyleva.

The CD features 19 hymns sung in Church Slavonic by composers such as Chesnokov, Danilin, Golovanov, Kastalsky, Archimandrite Matfei (Mormyl’), and Ledkovsky. The singing is dedicated to the memory of His Eminence Metropolitan Laurus, who blessed the founding of the Summer Music School. Every sale of this disk supports the Summer Music School and its valuable mission.

Canon to the Lord for a Sick Child

O Lord, Teach Me, and I Shall Know

Small Triptych of the Lord with angels

The Feasts of the Lord

The Kursk-Root Icon: A Miracle in Our Times

The Life of Saint Seraphim Wonderworker of Sarov for Young People

Teach Me Thy Statutes CD

More Honourable than the Cherubim CD