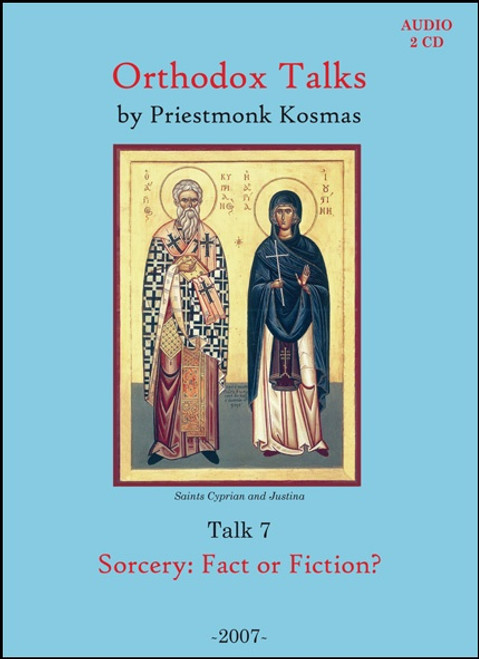 In recent years we have seen a rising interest and even an obsession with the occult, including "communicating" with the dead, magic, and demonology, to name just a few. This is evident in movies, TV programs, documentaries, books, magazines, and the internet. In addition, there are plenty of sorcerers and mediums who are all too willing to âhelpâ people for a fee.

In this talk, Father Kosmas uses the lives of Saints Cyprian and Justina and contemporary examples to explain how sorcery and other occult practices are both real and spiritually harmful. He reveals that the main reason Orthodox Christians involve themselves in the occult is ignorance of the Churchâs teachings on the subject. The Church clearly exposes the demons and their evil schemes, yet many clergy fail to teach Christians regarding occult practices, and instead either remain quiet, or deny their existence, or provide misinformation. Some even ridicule people who believe they exist.

The following questions are also discussed: is there such a thing as the "evil eye"? Is it really such a problem to visit a sorcerer or medium out of curiosity? Why do some people claim to have been helped by sorcerers? Why can it be dangerous to have exorcism prayers read over someone who is not possessed, but under demonic influence? Is it safe for a layperson, rather than a priest, to read prayers against magic and the evil eye?

Other points covered in this talk include: the serious consequences of going to a sorcerer; how people pay thousands of dollars to sorcerers for "protection" from black magic; the difference between possession and mental illness; how observing an exorcism can be very dangerous; the symptoms of sorcery; the difference between black magic and white magic; and real sorcerers versus fake ones.

The Feasts of the Lord