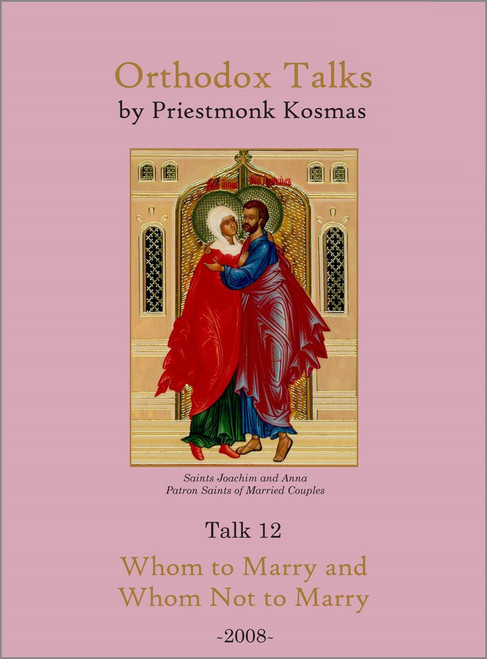 Marriages today are often troubled by many problems: divorce, adultery, domestic violence, pornography, addictions, and mental illness, to name a few. This can happen for many reasons, but one of the most common is a failure to make good decisions in choosing whom to marry. Internet match-making and dating sites and chat rooms, pre-marital sexual relationships, and other modern approaches to meeting and choosing a spouse only serve to make the problem worse.

In this talk, Father Kosmas discusses what one should look for in a spouse. He emphasises that the criteria used in choosing a spouse should also be applied to oneself. Some of the criteria discussed in detail include emotional maturity, financial responsibility, life skills, relationships with family and friends, spirituality, communication skills, personality, and oneâs stance on contemporary social issues. Warning signs to look out for include possessiveness, perfectionism, fault-finding, depression and other mental problems, and religious fanaticism.

The following questions are also discussed: is there such a thing as love at first sight? Can dating negatively affect oneâs future marriage? Is there such a thing as a soul mate? What does sex without commitment really mean? Should love exist before marriage? Can emotions and physical attraction be dangerous when choosing a spouse? Is âcompatibilityâ necessary for marriage? Should some people remain single? Is it important to seek Godâs will when choosing a spouse? Is marrying at an early age appropriate?

Other points covered in this talk include: the stress of dating and intimate relationships; pornography and its effects on oneâs marriage; difficulty âsocialisingâ without drugs or alcohol; unhealthy emotional relationships; the importance of preparing for marriage while still single; how an inferiority complex can influence oneâs choice of a spouse; the danger of marrying someone who is having difficulty deciding between marriage and monasticism; and how mental or physical illness can affect a marriage.

Talk 11: Better to Marry Than to Burn with Passion

Talk 11: Better to Marry Than to Burn with Passion

Marriage and Virginity According to St. John Chrysostom

Set of Cups for Zapivka