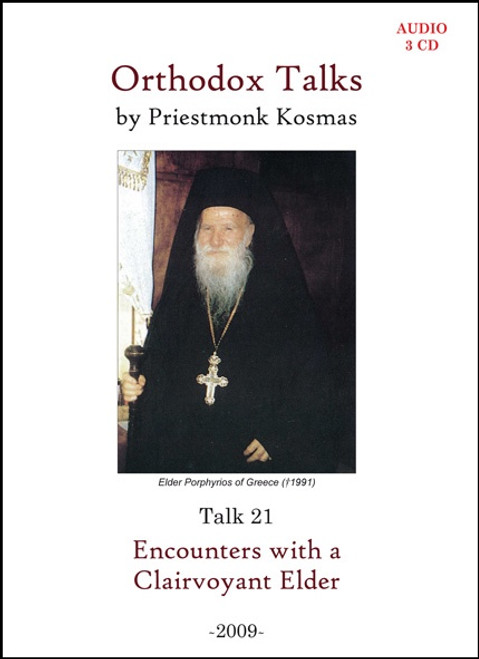 Elder Porphyrios of Greece, an extraordinary holy father of our own times, was given the gift of clairvoyance by God for his humility, love, and faithfulness to holy Orthodoxy. This gift enabled him to see into the past, present, and future, looking into peopleâs souls and perceiving their innermost thoughts. He also revealed to many their illnesses â spiritual, mental, and bodily â healing them as God willed.

In this talk, Father Kosmas relates many accounts of Elder Porphyriosâ clairvoyance. He emphasises the importance of not confusing the gift of clairvoyance given by God with that of psychics, clairvoyants, mediums, fortune-tellers and astrologers. Many who are ignorant of the teachings of the Orthodox Church are deceived into believing that these imposters possess God-given powers, when in reality what power they have comes from the evil spirits.

The following questions are also discussed: what is the difference between an Orthodox elder and a psychic? Can the possessed know our sins? Can psychics, mediums, etc., really reveal the unknown and the future? Why do Muslims go to Orthodox churches for prayers and miracles? Is ecumenism less dangerous today than in the past? Can the prayers of monastics be more effective than those of a bishop? Why did the elder blame parents for their childrenâs problems? Should parents tell their fellow Orthodox if their own children are suicidal?

Other points covered in this talk include: a cure for depression; the incorrect belief that monastics care only about themselves; how the elder told one mother that her beloved son would strike her; expensive good luck charms; the miracle of the Holy Fire in Jerusalem; how a Roman Catholic monk was amazed at the elderâs clairvoyance; the obsession of some Orthodox Christians with converting people to Orthodoxy; how the elder revealed a taxi driverâs dark and hidden secret; and why associating with certain people can be spiritually harmful.

Talk 60: Exposing Psychics, Clairvoyants, Mediums, Fortune-tellers and Astrologers in the Light of Orthodoxy

Talk 23: Mental, Physical and Spiritual Disasters: The Lack of Discernment