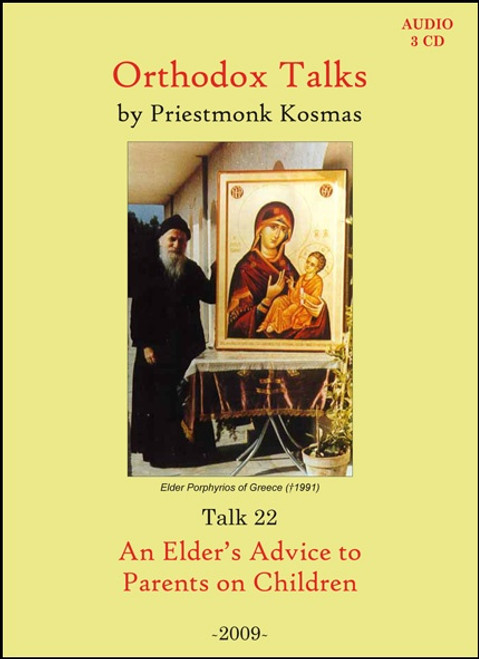 Today, more than ever before, parents are very concerned with the question of how to raise their children. A large percentage of Orthodox parents look for answers outside of the Church, in books and magazines, on the internet and TV, and from health practitioners. Some in desperation even resort to mediums, psychics, and magicians for advice and help. Unfortunately, the answers they receive are often incorrect, incomplete, or even dangerous.

In this talk, Father Kosmas uses the teachings of Elder Porphyrios of Greece (â 1991) to answer many questions regarding the upbringing of children. He draws on the many encounters of parents with the elder, who spoke with great discernment about issues specific to the times in which we live. Parents who have followed the elderâs advice have seen miracles occur in their families.

The following questions are also discussed: can we blame childrenâs problems on their parentsâ mistakes? Can putting pressure on children cause problems?Â  Does the subconscious play a role in the spiritual life? Can constant arguing lead to holiness? Does a child in the womb inherit his motherâs passions? Can a motherâs aversion to her unborn child affect him in later life? Should selfish couples avoid having children? How can prayer heal those with mental illness? Can a person with OCD progress spiritually? Why did the elder advise one mother to leave her children for a time?

Other points covered in this talk include: how the elderâs prayer brought a group of rebellious youth to church; how a lack of love between husband and wife can result in âproblem childrenâ; post-natal depression; the negative effects of feminism on Orthodox women; suicidal children; the destructive consequences of jealousy between siblings; spoiled children; the tragic effects of forcing people to go to confession; the false idea that holiness means living without sins and passions; and the need for parents to pay attention and respond to their childrenâs anxieties and fears.

Raising Them Right: A Saint's Advice on Raising Children

Talk 40: Advice on Prayer: Does it Have to Be So Complicated?

Talk 75: To Praise or Not to Praise Children: What Should Parents Do?

Talk 02: The Truth About Death and Dying

Talk 78: Why Do the Demons Tremble When We Read the Lives of the Saints?

Talk 28: Do the Dead Need Our Help or Do We Need Theirs?

Talk 33: And No Wonder, for Even Satan Disguises Himself as an Angel of Light

Talk 29: If Only the Saints are Saved, What Happens to the Faithful Who Die Struggling With Sins and Passions?