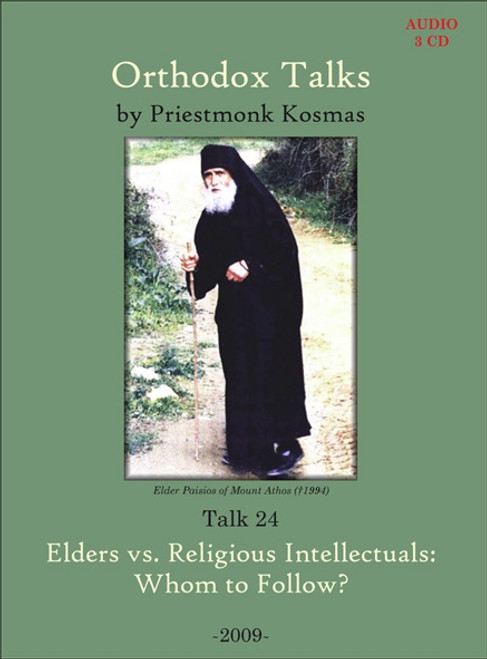 In the Orthodox Church today there is a growing trend towards using logic and reason to explain miracles, mysteries, Divine Providence and demonic phenomena. This school of thought has existed in the Western Church for centuries, and is known as rationalism. The disease of rationalism is now being spread in the Orthodox Church by some clergy and theologians, many of whom have studied in the West. But Orthodox Christianity cannot be comprehended solely through reason and logic.

In this talk, Father Kosmas uses the teachings of Elder Paisios of Mount Athos (â 1994) to explain that rationalism comes from a partial or complete lack of faith, and has its roots in pride, ego and self-trust. Since the Great Schism, there has always been within the Orthodox Church a battle between those of the true Orthodox spirit and those of this Western spirit. Father Kosmas emphasises that Orthodox Christians need to embrace the spirit of Orthodoxy as passed on to us by the saints and the elders, particularly those saints and elders who have lived during our times.

The following questions are also discussed: is pride the cause of many mental illnesses? Why does God allow mental illness? Why are we blind to Godâs intervention in our lives? Are there people whose spiritual lives exist only in their minds? Why did one well-educated priestmonk become mentally ill? What does the elder mean by âspiritual headacheâ? Can overindulging in reading spiritual books be dangerous?

Other points covered in this talk include: how human logic in the spiritual life can lead to denial of divine and demonic supernatural phenomena; how God stopped a man who wanted to visit a fortune-teller; a simple monk who performed a miracle by praying to âSaint Ascensionâ; the miracle of the Holy Fire in Jerusalem; Godâs judgement as opposed to human judgement; and the need to beware of priests and theologians who suffer from rationalism.

Talk 28: Do the Dead Need Our Help or Do We Need Theirs?

Talk 30: Did You Know That the Souls in Hades are in Urgent Need of Help?

The Old Calendarists and the Rise of Religious Conservatism in Greece