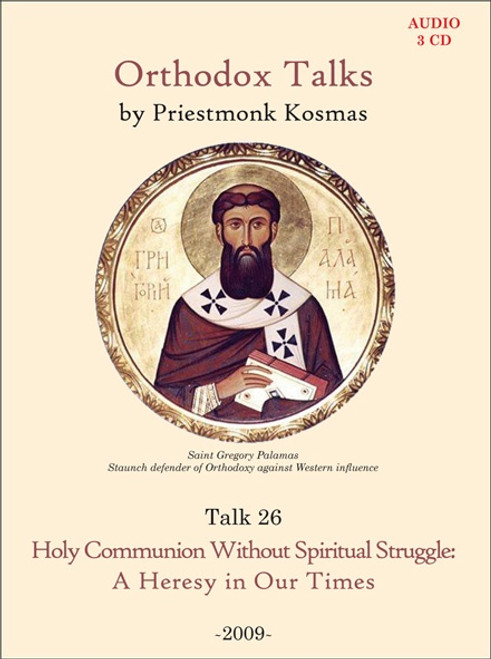 Some traditional Orthodox theologians believe that the spirituality of many Orthodox Christians has become quite similar to Western spirituality. These Orthodox Christians share the distorted Protestant view of repentance as merely accepting Christ and feeling some regret for past sins, and the Roman Catholic over-emphasis on partaking of the Sacraments and obedience to the bishop. This movement within Orthodoxy to westernize the Church is not a new one. Its supporters (including hierarchs, clergy and theologians) undervalue the role of asceticism in the lives of all Orthodox Christians.

In this talk, using the teachings of the Orthodox Church, Father Kosmas explains that partaking of the sacraments without spiritual struggle is a heresy similar to that against which Saint Gregory Palamas fought in his day. He emphasises that God indeed freely gives His grace through the sacraments, but manâs cooperation (through personal ascetic struggle) is absolutely necessary for the healing and salvation of the soul.

The following questions are also discussed: what are some of the reasons people believe in God? Do Orthodox Christians differ much from religious people of other confessions? How should we regard scandals in the Church? What is the difference between pietism and piety? Should we avoid external practices so that people will not think us Pharisees? How do we deal with ecumenist bishops? Why have some people improved spiritually upon ceasing to partake of Holy Communion?

Other points covered in this talk include: religious brain-washing; how believers can become unbelievers when something âbetterâ comes along; what happened to a woman when exorcism prayers were stopped; the danger of meeting our ego face to face; the difference between regret and repentance; a young manâs delusion in leaving home so as to struggle better spiritually; and why at times asking for self-knowledge can be extremely dangerous.

Holy Communion: How and When

Talk 29: If Only the Saints are Saved, What Happens to the Faithful Who Die Struggling With Sins and Passions?

Talk 02: The Truth About Death and Dying

The Experience of God (Vol. 6): The Fulfillment of Creation

Talk 78: Why Do the Demons Tremble When We Read the Lives of the Saints?