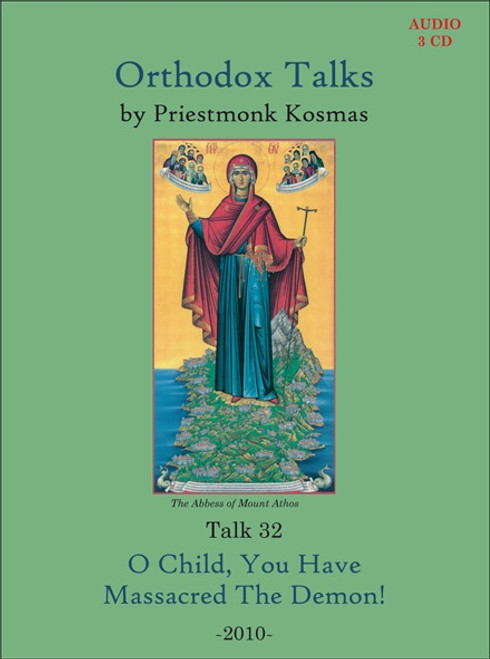 People often say that Orthodox Christians should focus on loving Christ and their neighbors, and not bother thinking about the demons. These same people criticise those who instruct the faithful concerning demonic warfare. When Elder Paisios of Mount Athos was writing the life of Elder Arsenios the Cappadocian, he was advised to omit all references to demonic possession in order to appeal to European readers, many of whom do not even believe the devil exists.

In this talk Father Kosmas explains that Orthodox Christians are called spiritual athletes, spiritual warriors, and soldiers of Christ precisely because they do battle not only with their own passions, but also with the demons. He emphasises that a Christian must know his enemy in order to defeat him and attain salvation, and points out that revealing oneâs thoughts to a spiritual father is one of the best defences against the demons.

The following questions are also discussed: is revelation of thoughts to a spiritual father only for monastics? How should one look for a good spiritual father? Why can it be dangerous to watch an exorcism? Are Christians allowed to believe some dreams? Can pride produce spiritual zeal? Why did one priest say that he prefers passionate spiritual children? What can happen when a person ignores his conscience? How does a proud person relate to the demons? Are there substitutes for exorcisms? Can the demons help one to fight heresy? What is meant by âexperiential humilityâ? Is it the goal of spiritual struggle to attain divine gifts?

Other points covered in this talk include: the perils of trusting oneself more than oneâs spiritual father; a monkâs experience of hearing a voice at his door; how a priest wanted to learn his future from a demon; how the church services and prayers produce humble-mindedness; the difference between Roman Catholic and Orthodox exorcisms; black magic in Africa; the importance of opening up to oneâs spiritual father; the spiritual warfare one undergoes before confession; and one Orthodox âzealotâsâ horrible attitude towards women.

Talk 25: Why Logic and Reason in Spiritual Matters Can Lead to a Loss of Grace

Talk 10: The Struggle of Saint Xenia the Fool-for-Christ for Her Unrepentant Departed Husband

To the Newly Baptized...