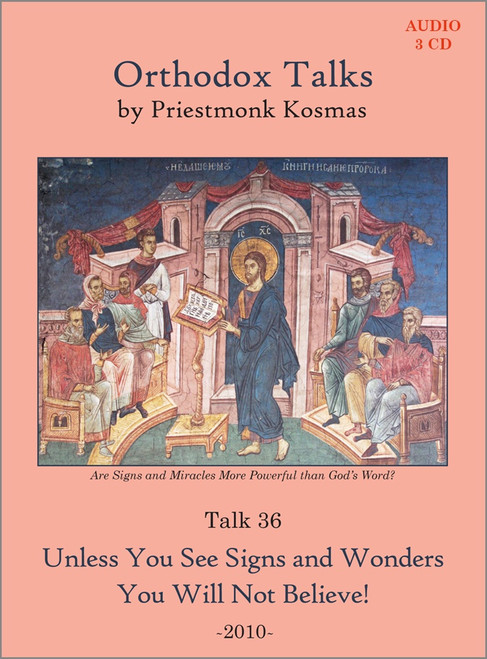 In reading the Gospel and the lives of the saints we come across many signs and miracles. These miracles were especially abundant during the time of Christ and the apostles, bringing many to Christianity, and though less frequent they continue to this day. Over the past 2000 years, however, many Christians have also been converted to Christianity or strengthened in their faith without miracles, merely by hearing and studying the Word of God.

Using patristic commentaries on the Holy Gospel, Father Kosmas compares the effect of Godâs word on the soul with the effect of signs and miracles, to determine which of the two is more powerful, lasting, and spiritually beneficial. He examines the distorted views regarding miracles and signs held by many Orthodox Christians, and why this can lead to falling away from the Church.

The following questions are also discussed: is it true that many who converted after witnessing signs and miracles later fell away from the Church? What was the stronger medicine to which Christ resorted for unbelievers? Can an unbeliever be healed through the faith of another? Is it right to dismiss the fervent faith of non-Orthodox? Why did Christ offend the Jews by praising the faith of pagans? Why did many Jews reject Christ even though they saw Him perform numerous signs and miracles? What is âmiracle maniaâ? Why is it wise to fear those who seek signs and miracles but do not study the Word of God?

Other points covered in this talk include: how numerous Orthodox Christians remain indifferent or fall away despite the many signs and miracles in the Church today; âmiracle-workersâ and their hunger for attention; St John Chrysostomâs explanation of why signs were given to the unbelievers and not to believers; the difference between the inner and outer darkness of hell; the modern-day scribes and Pharisees of the Orthodox Church; an elderâs rejection of those who approached him as they would a magician; and the relationship between sins and sickness.

Talk 37: What is the True Purpose of Signs and Miracles?

Praying for You blank card

Talk 25: Why Logic and Reason in Spiritual Matters Can Lead to a Loss of Grace

Talk 14: Are We Seeking Salvation or Are We Deceiving Ourselves and Others?

To the Newly Baptized...

The Service of Confession