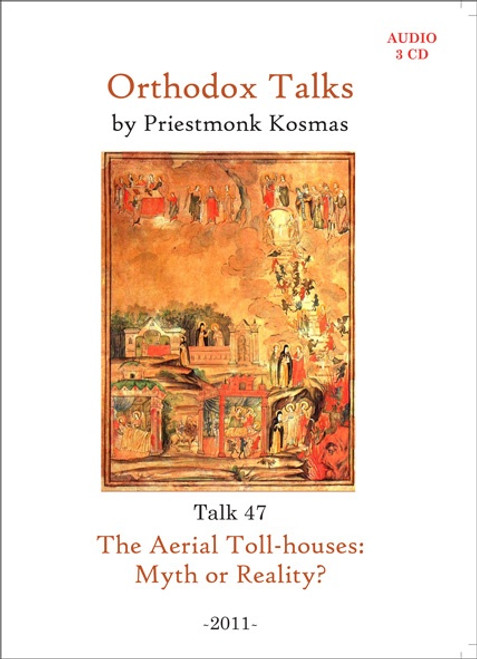 In this talk, Father Kosmas outlines and discusses the many accusations made by a number of Orthodox clergymen and theologians against this soul-saving teaching of the toll-houses. To refute these accusations, he uses numerous examples from the following four sources: a. The Lives of the Saints; b. The Divine Services of the Orthodox Church; c. The Writings of the Holy Fathers; and d. The Holy Scriptures. After listening to this talk there will be no doubt that this teaching is indeed Orthodox, because for the entire history of the Church it has been âbelieved everywhere, always, and by allâ (Saint Vincent of Lerins).

The following questions are also discussed: should the Church use fear tactics similar to those used in the world? Are all visions regarding life after death true? Why did one saint excommunicate zealot monks? Do clergymen and theologians who deny the teaching of the toll-houses become a reason for the loss of many souls?

Other points covered in this talk include: how two non-Orthodox theologians put many Orthodox bishops to shame; spiritual schizophrenia in the Church today; how some zealots also oppose the teaching of the toll-houses; the Catholic Churchâs attitude towards supernatural references in the ancient lives of the saints; and how Church controversies can be immensely beneficial.

Talk 03: Can We Be Called Orthodox Christians Without Reading the Lives of the Saints?

Talk 48: Blessed Are the Merciful, For They Shall Obtain Mercy!