Talk 51: The Life of Saint Nektarios, Part 3: His Final Years and Blessed Repose 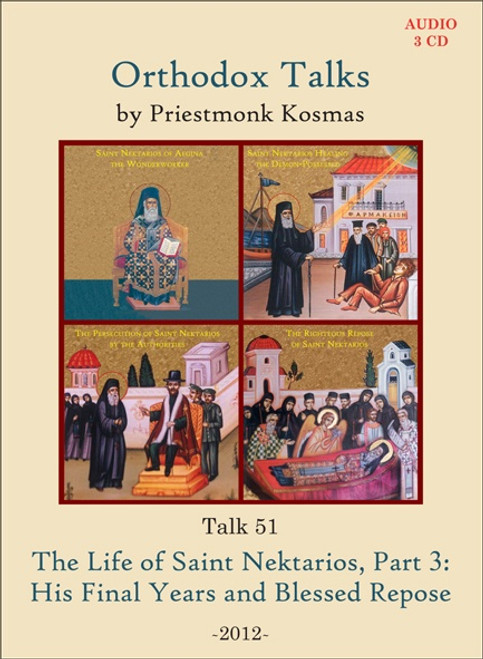 Talk 51: The Life of Saint Nektarios, Part 3: His Final Years and Blessed Repose

Many people in the Church today unfortunately hold incorrect views regarding spiritual life. For example, many believe that when they progress in the spiritual life, God sends them fewer temptations and afflictions. The question arises: why do so many hold this view when the lives of the saints and the writings of the Holy Fathers teach us the exact opposite?

In Part 3 of the life of Saint Nektarios, Father Kosmas explains that not only is this view wrong, it also prevents one from progressing in the spiritual life. To illustrate this, he describes how even though Saint Nektarios had reached such a high level of sanctity that he even performed miracles and saw visions, God still allowed him to suffer from slander, persecution, and sickness to the very end of his life.

The following questions are also discussed: what was the saintâs attitude towards fasting and sickness? Why did he present the negative aspects of monasticism rather than the positive? Why did the saint believe that Christianity without monasticism is dead? Why was he disobedient to the school authorities? Was he always sure of Godâs will? Why did the saint emphasize love and humility above asceticism? How did he overcome demonic thoughts of doubt? Why did the saint get involved with properties, wills, and finances?

Other points covered in this talk include: the importance of being mentally, physically, and spiritually strong before considering marriage or the monastic life; the saintâs amazing encounter with a possessed youth; how unfortunate those Orthodox Christians are who have no trust in God; an example of an Orthodox woman who could not pray for her husband; the error that holiness can be achieved without almsgiving; the saintâs horrible encounter with a proud and rude former student; and the devilâs attempt to destroy Saint Nektarios and the convent through an evil mother.

Talk 03: Can We Be Called Orthodox Christians Without Reading the Lives of the Saints?