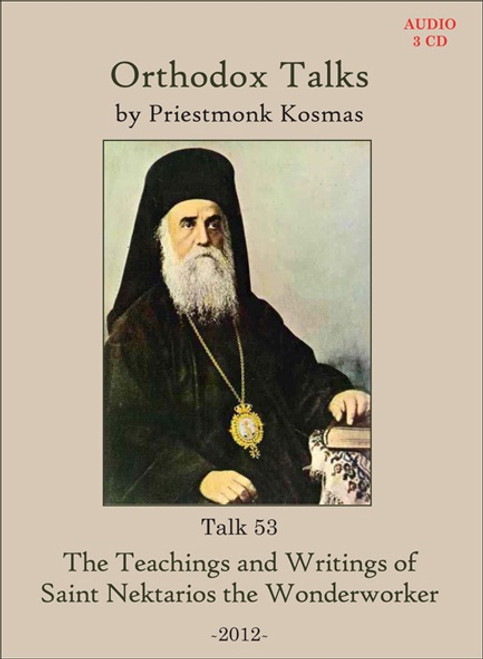 Many know of the great Greek saint of the last century, Nektarios of Pentapolis the Wonderworker. Saint Nektarios is especially known for the countless miracles that he has performed, and many turn to him for help in their time of need. Yet the majority of these people know very little about this saintâs life, and still less about his beneficial teachings and writings.

In this talk, Father Kosmas examines a broad selection of the saintâs teachings and writings. He describes how many modernists have given a distorted view of Saint Nektariosâ character, saying that out of humility and meekness he did not speak out against the enemies of the Church, when in fact the opposite is true. Saint Nektarios was especially critical of the âwolves in sheepâs clothingâ in the Church, and of the incorrect teachings of the Roman Catholic and Protestant Churches.

The following questions are also discussed: why did the saint praise some of the writings of the pagan philosophers? Did the saint teach that memorial services can free some of those held in Hades? What did the saint write concerning the possibility of union between the Orthodox Church and the Roman Catholics? What was the saintâs attitude towards frequent Holy Communion? What valuable advice did the saint give concerning confession? Why is self-knowledge absolutely essential for salvation?

Other points covered in this talk include: the saintâs condemnation of the Western dogma of purgatory; his view on Darwin and evolution; how the rapidly-spreading message of âdonât judgeâ is actually demonic; how some confuse weakness and fear with the virtues of humility and meekness; how Orthodox ecumenists proudly believe that they are above the Holy Fathers of the Orthodox Church; and Saint Nektariosâ teaching concerning the Holy Theotokos and the saints.

Repentance and Confession by St Nektarios

For Mind and Heart: St. Nektarios as Teacher

Poster - All Saints of Russia