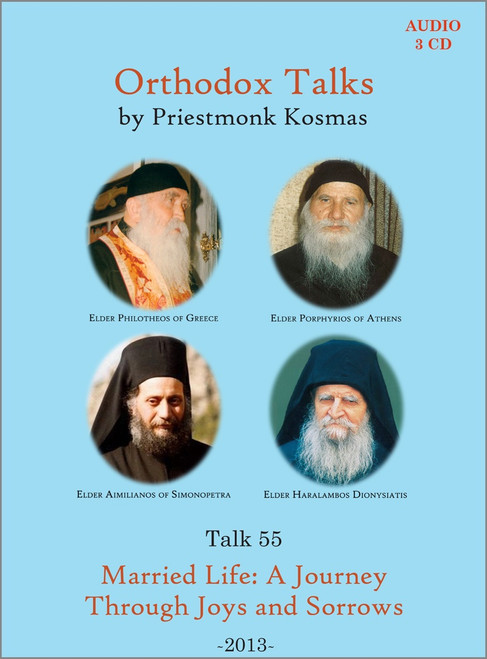 In this talk, Father Kosmas uses the writings and advice of various saints and contemporary elders to show that marriage is a struggle as well as a joy. He emphasizes Christâs teaching that one attains salvation through suffering â that is, the carrying of oneâs cross â and that marriage is one such cross. When Orthodox Christians understand that the difficulties and struggles of marriage are spiritually beneficial, then they will also understand that, except in extreme circumstances, leaving oneâs marriage due to difficulties can be a rejection of oneâs cross.

The following questions are also discussed: why did an elder advise one couple to argue with others? Why did a saint describe spousesâ condemnation of each other as âpoisonâ? Why did an elder compare people who look for faults in their spouses to filthy flies? How should one deal with a very difficult spouse? What valuable lesson did Saint Anthony the Great learn from a layman? What does the Church teach regarding those who desire to leave their spouses?

Other points covered in this talk include: the disastrous effects of nagging; how Saint Paul condemns those who do not care about their spousesâ salvation; the saintsâ advice on how to correct oneâs spouse; the horrible effects parentsâ quarrelling has on children; an elderâs advice to a woman who feared that her husband would divorce her; and the objection of some to the Churchâs glorification of a woman who was physically abused by her husband.

Akathist to the Righteous Joachim and Anna: For Blessed Married Life

Talk 27: How Does One Overcome Coldness and Deadness in the Spiritual Life?

Talk 73: On the Upbringing of Children According to Saints Paisios and Porphyrios - Part 4

Talk 60: Exposing Psychics, Clairvoyants, Mediums, Fortune-tellers and Astrologers in the Light of Orthodoxy