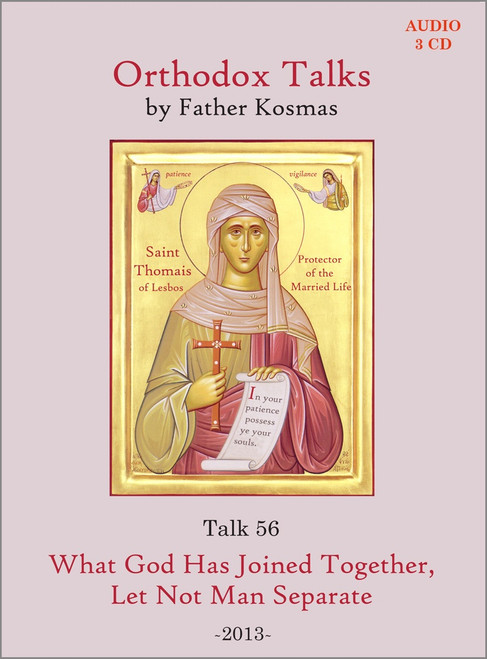 In the New Testament Christ teaches that a married couple must remain inseparable to the end, and that the only just cause for divorce is adultery. Furthermore, Christ says that those who divorce and remarry for any other reason are condemned as adulterers.Â  Yet, over the centuries the Orthodox Church has allowed divorce for a number of other reasons, and may even perform second and third marriages following a divorce. What few people know is that the Church actually acknowledges such remarriage as a transgression of Christâs commandment. This raises the question: is the Church contradicting the clear teaching of Christ regarding divorce?

In this talk, Father Kosmas explains that even though the Church sometimes grants divorces and allows subsequent marriages, Orthodox Christians should put great effort into avoiding divorce. Using the teachings of the saints and elders he gives practical advice on preserving oneâs marriage by avoiding unnecessary problems which can lead to divorce.

The following questions are also discussed: can psychological abuse be worse than physical abuse? How has feminism affected marriages? What is meant by âdonât run ahead of your spouseâ? Can having an abortion lead to divorce? Can God reveal His will through oneâs spouse? Can it sometimes be right to compromise on religious matters to avoid divorce? Has the Churchâs use of âeconomyâ regarding divorce and remarriage caused greater problems?

Other points covered in this talk include: how a temporary separation can prevent divorce; physical violence in marriage; how egotism can destroy a marriage; how simplifying oneâs life can save a marriage; selfishness in marriage as a recipe for divorce; suffering with a difficult spouse; mental illness in a marriage; and why one should not be alarmed when old passions resurface after getting married.

What God Has Done for Our Salvation

Talk 37: What is the True Purpose of Signs and Miracles?

Talks on Corinthians Part 6: What Gifts Should We Ask of God?

Talk 62: Adultery: Which is Better, Divorce or Forgiveness?

Theotokos (Joy of All Who Sorrow) Mounted Jordanville Icon