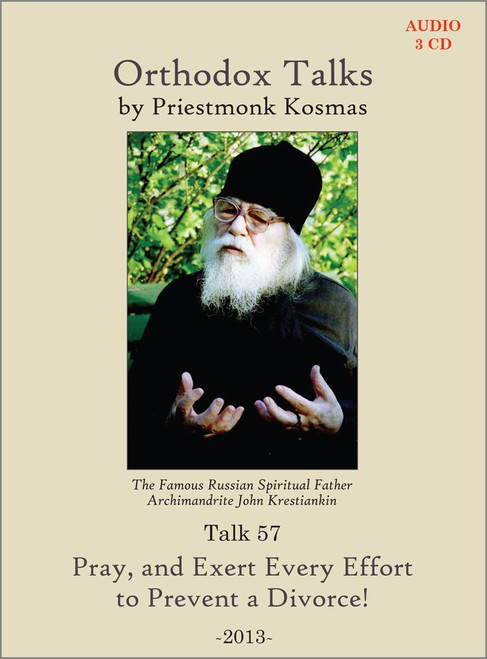 It is a sad fact that divorce, so widespread in secular society and other religions, has become a rising problem in our Orthodox Church, as well. People seek divorce for many reasons, but the underlying reason is usually the same:Â  a belief that there is no hope of saving the marriage. We often hear statements such as: âMy husband will never changeâ, or: âMy wife is incapable of improvingâ, or: âThere is no point in continuing the marriage.â Tragically, some clergymen have a similar attitude, which only encourages divorce.

In this talk, drawing on the letters of the famous Russian spiritual father Archimandrite John Krestiankin, Father Kosmas strongly denounces this incorrect attitude. Such statements are blasphemous, he explains, because they deny Godâs power to change circumstances and people. The saints and elders teach that with prayer, struggle, and the many church services available to all Orthodox Christians, marriages can be saved from the disaster of divorce.

The following questions are also discussed: how can religion be a reason for divorce? What advice has been given to people whose spouses are out of control? What advice does Saint John Chrysostom give those whose spouses are trying to force them into immorality or unbelief? How do children react to the parent who instigated the divorce? What is meant by âpraying outâ someone close to you? Is it always advisable to stay in a marriage no matter what the circumstances?

Other points covered in this talk include: an instructive story about a priest who was tormented by his wife; advice for people contemplating divorce; how divorce should not be considered a personal matter, but something which affects others; how the many divorces and remarriages in the Orthodox Church have become a joke; and an account of a man whose wife threw him out and divorced him because of his addiction.

Talk 62: Adultery: Which is Better, Divorce or Forgiveness?

Talk 39: Why Do Many Orthodox Christians Refuse or Do Not Know How to Pray?

Talk 30: Did You Know That the Souls in Hades are in Urgent Need of Help?