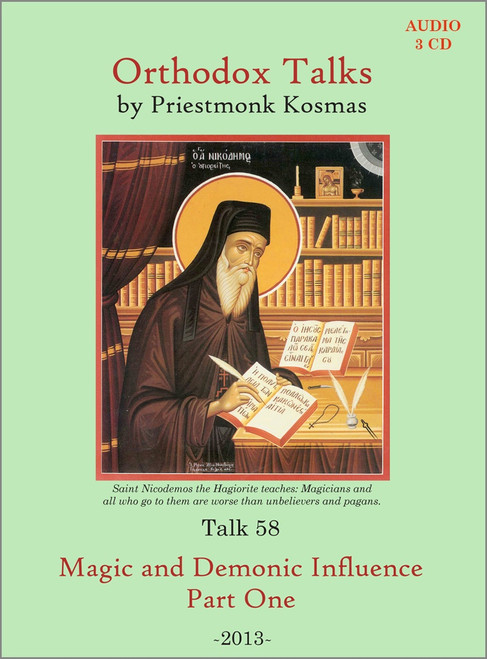 Many Orthodox priests sadly admit that it is becoming increasingly common for people to come to confession with sins involving magic. There are many reasons people seek a magicianâs help: marital problems, learning the future, healing from sickness, financial success, protection from the evil eye and black magic, communicating with a departed loved one, for âgood luckâ, and for âloveâ. But some people go to magicians for very different reasons: to cause marital problems or divorce, to cause physical and mental illness or death, or to create financial problems.

In this talk, Father Kosmas uses the writings and advice of various saints and contemporary elders to present the Orthodox Churchâs teaching on the topic of magic. He especially focuses on the dangers of becoming involved in any type of magic, and the reason why so many married couples today are affected. He also discusses the problem of how some people believe themselves to be victims of magic anytime something bad happens to them or their close ones.

The following questions are also discussed: can magic be used to make someone marry a person? Can magic be used to prevent adultery or divorce? Does the evil eye really exist? Can a magician heal a sick person? What materials and objects are used in magic? What do magicians do to the charms and amulets they give people to âprotectâ them from black magic and the evil eye?

Other points covered in this talk include: an account of one mother who tried to end her sonâs marriage; an elderâs response to a woman who wanted to marry a married man; how an in-lawâs interference can lead to divorce; the saintsâ stern instructions to those who have been involved in magic or gone to magicians; a saintâs condemnation of those who cast magic spells on couples during the marriage ceremony; and accounts of mothers using magic on their married children.

Talk 70: On the Upbringing of Children According to Saints Paisios and Porphyrios - Part 1