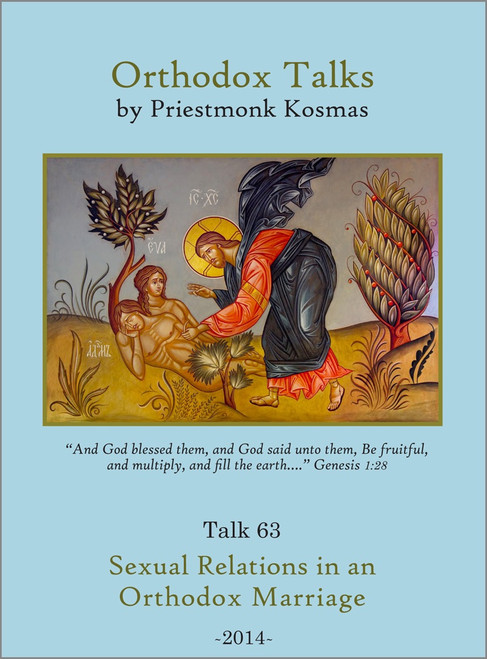 There exists today a general confusion regarding the topic of sex, due primarily to the considerable conflicting and often incorrect information available on the topic. Many Orthodox clergy and theologians are among those confused regarding sexual relations in married life. There is a growing belief amongst Orthodox Christians that the Church should stay out of a married coupleâs bedroom. Instead, Godâs commandments, the canons, and the teachings and examples of the saints have been replaced by sex therapists, psychologists, doctors, sex manuals, pornography, television and the internet.

In this talk, Father Kosmas draws on various saints and contemporary elders and the Holy Canons to present the Orthodox Churchâs teaching on sexual relations in married life. In particular, he answers some very important questions about which Orthodox Christians are often confused: is sex within marriage and the pleasure associated with it dirty or somewhat sinful? Should married couples avoid having sexual relations as much as possible if they want to progress spiritually? Are sexual relations tolerated only for the purpose of childbearing?

The following questions are also discussed: how did the Church deal with those who considered sexual relations within marriage repulsive and sinful? Are there any specific canons forbidding sexual relations on certain days and during certain periods? Do some forms of contraception cause unintended abortions? What happened to one couple who were strongly encouraged by their spiritual father to live as brother and sister? Why did the Church anathematise an ascetical bishop who taught that sex, meat and wine are evil?

Other points covered in this talk include: the varying opinions of clergy regarding contraception; how the Church condemned those who believed that there is no salvation for couples who have marital relations; an elderâs advice to a woman whose husband was demanding marital relations on days when they are not allowed; how some are offended that the Church places virginity and celibacy higher than marriage; an account of a man who feared he would commit a sinful act due to his âasceticalâ wifeâs sexual abstinence; and how some believe that monastics should not give advice on matters regarding marriage and sex.

Season of Repentance: Lenten Homilies of Saint John of Kronstadt

Akathist to the Righteous Joachim and Anna: For Blessed Married Life

The Mystery of Marriage: A Fellowship of Love

How to Inherit Eternal Life 09: On Envy and Despondency