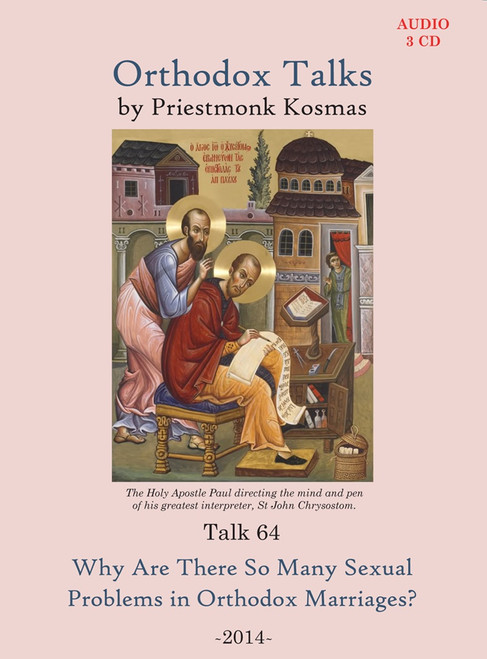 One would have thought that in todayâs supposed sexually free and enlightened society sexual problems would be at a minimum. Yet on the contrary we see that sexual problems are worsening, and among married couples can even lead to divorce. Many seek the help of sex therapists, marriage counselors, psychologists, doctors, and those involved in supernatural practices. This includes even some Orthodox Christians, who instead of seeking help from the Church are running to the same people mentioned above. Why?

In this talk, Father Kosmas draws on the works of Saint John Chrysostom to provide solutions to many sexual problems encountered in marriage. In particular, he speaks in detail about Saint Paulâs teaching regarding the sexual rights of the spouses. Knowledge of this teaching not only helps to bring about marital harmony, but is also a remedy against the horrible disease of adultery.

The following questions are also discussed: why were so many people embarrassed when listening to Saint John Chrysostom speaking about sex in marriage? What is the main reason for marriage: childbearing or avoiding sexual immorality? Is it worse for a woman to commit the sin of adultery than for a man? Why is the Church always cautious regarding sexual abstinence in marriage? How did Saint John Chrysostom describe households in which one spouse abstains from sexual relations without the otherâs permission?

Other points covered in this talk include: the many reasons a spouse can lose sexual interest and the problems associated with this; the difference between an unmarried person committing fornication and a married person committing adultery; how husband and wife are equally responsible for the honour of their marriage bed; the false belief that Saint Paulâs words, âThe wife does not rule over her own body, but the husband doesâ is an example of the Churchâs repression of women; and a saintâs advice to the married on how to respond to someone attempting to seduce them into adultery.

Talk 39: Why Do Many Orthodox Christians Refuse or Do Not Know How to Pray?

Talk 34: What Do We Need to Know to Understand the Deceptions of Our Times?

Talk 09: The Sexual Revolution: Are We Better Off?

Season of Repentance: Lenten Homilies of Saint John of Kronstadt