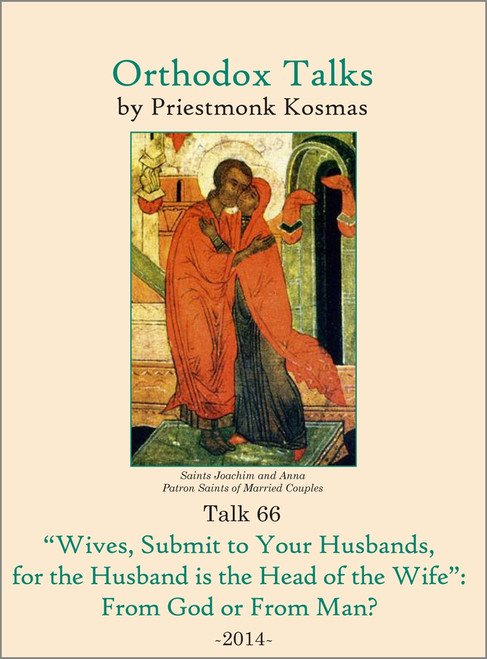 Over the last few decades a storm has been raging over the roles of men and women in marriage. Saint Paulâs words regarding women have caused many to accuse Christianity of misogyny (the hatred of women). Two particularly controversial statements that he makes are âWives should submit to their husbands in everythingâ and âThe husband is the head of the wife.â The question arises: are these verses meant to be interpreted literally, and, if so, is it possible to fulfill them in these modern and âenlightenedâ times?

In this talk Father Kosmas uses the writings and advice of the saints and elders to analyze exactly what Saint Paul meant by âWives should submit to their husbands in everythingâ and âThe husband is the head of the wife.â He emphasizes that failure to understand these two verses is the leading cause of failed marriages today.Â

The following questions are also discussed: if the man is the head of the wife does that make her inferior to him? Does submission in the marriage mean slavery? Should a woman obey an irresponsible husband? Does the Church consider the head of the family to be responsible for its spiritual and material wellbeing? Why did the saints consider the wife an advisor to her husband? Is the statement âGod created inequalityâ true? How does Christâs statement that âwhoever wants to be first must be slave of allâ apply to a married couple? Which great saint of the Church called gender equality silly?Â

Other points covered in this talk include: how there cannot be two heads in a marriage; the link between divorce and husbands who do not lead and love their family; an explanation of Elder Paisiosâ words: âThe husband is the captain of the household, but also the lowest laborerâ; Saint John Chrysostomâs advice to a man who complained that his wife did not love him; the shameful and inexcusable fact that many Protestants adhere to Christian principles of marriage better than most Orthodox; and an unfortunate example of a woman whose husband did not show her love.

This Was From Me

Talk 10: The Struggle of Saint Xenia the Fool-for-Christ for Her Unrepentant Departed Husband

From God to You