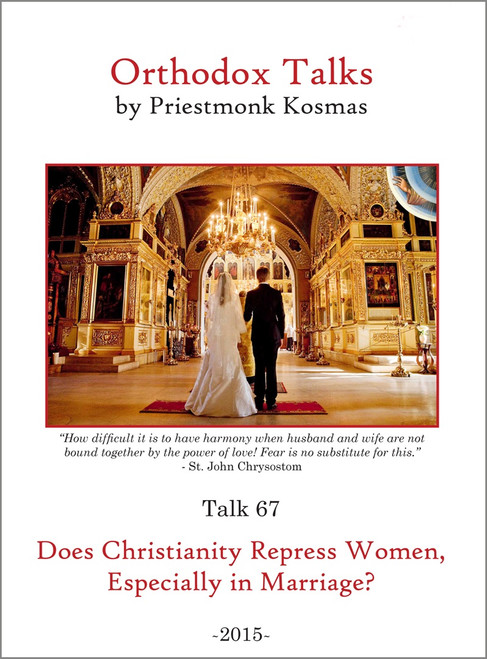 Christianity is often accused of repressing women, especially in its teachings on marriage. There are many verses in the Bible, particularly in Saint Paulâs epistles, that many today see as treating women quite negatively. Three such verses cited by Christianityâs accusers are: âWives, submit to your own husbands,â âthe wife must fear her husband,â and âI do not permit a woman to teach or to assume authority over a man.â A literal interpretation of these verses would be in direct opposition to modern societyâs view on women and marriage.

In this talk Father Kosmas explains in some detail what Saint Paul really meant by âthe wife must fear her husband.â He emphasizes that todayâs attacks on Christian marriage stem either from ignorance or from a deliberate distortion of the Churchâs teachings on the subject.Â  He also answers the important question of whether Saint Paul means that women are never permitted to teach men or to have authority over men in the workplace.

The following questions are also discussed: how do women react when irresponsible husbands allow them to take over responsibility for the family? What did a great saint mean when he described men as âwild lionsâ in need of taming? Why do many men find it difficult to love and care for their wives? Does a person ever have the right to reprimand or punish their spouse? How should one treat a spouse who is not fulfilling his or her duties? What is meant by âspouses have to spit bloodâ?Â

Other points covered in this talk include: how most couples today desire harmony in their marriages above all else; an account of a woman whose husbandâs lack of affection and attentiveness drove her to have an affair; how the teachings of feminism are better known than the teachings of the Church; how more and more women are finding it difficult to open up to their husbands; a saintâs criticism of forced obedience in marriage; and how a great saint once said, âWhat kind of marriage can there be when the wife is afraid of her husband?â

Talk 31: Does Christianity Really Cause Guilt and Depression?

Talks on Corinthians Part 5: Women in the Church

Sermons and Writings of Saint John of San Francisco: Book 4

Sermons and Writings of Saint John of San Francisco: Book 3

Sermons and Writings of Saint John of San Francisco: Book 1

How to Live According to the Faith

How to Approach the Reading of the Gospel and Holy Fathers