Talk 68: How Refraining From Marital Relations Can be Both Beneficial and Harmful 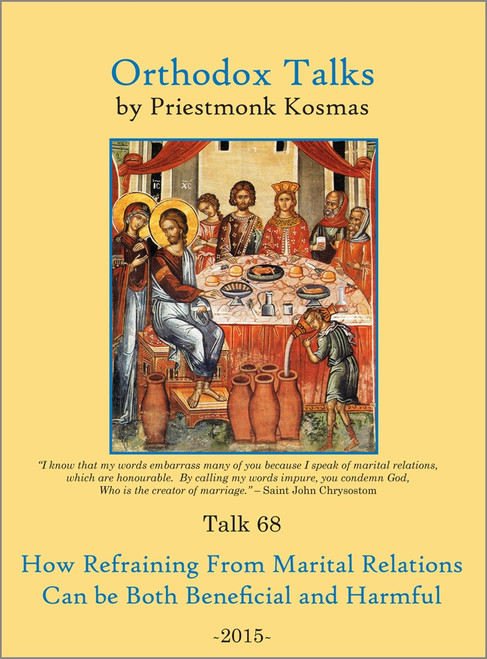 Talk 68: How Refraining From Marital Relations Can be Both Beneficial and Harmful

Married Orthodox Christians are constantly bombarded with misinformation regarding sexual relations in marriage. Mass media and entertainment, the internet, social networks and the educational system tirelessly wage war on the institution of marriage while promoting sexual immorality. Yet frequently when these confused and suffering married Christians turn to the clergy and even the saints of the Orthodox Church for guidance, here too they find conflicting opinions. What are they to do?

In this talk Father Kosmas explains that the main reason for this confusion is that evil spirits are always striving to distort Godâs creation, including marriage and sexual relations. The result is an improper attitude toward marital relations, sexual pleasure and sexual abstinence, and a misunderstanding of monasticism, virginity and chastity. He emphasizes that to understand the Churchâs teaching on marriage and sexual relations one must study all aspects of it, and not focus only on the few saints, elders and clergymen whose views on the topic are contrary to the consensus of the Church.

The following questions are also discussed: if marital relations are not sinful, why must Christians refrain from them on certain days? What did a saint mean when he said that even a married woman can still be considered a true virgin? What happened when a deacon stopped having marital relations with his beautiful wife for the sake of praise? Why did some saints say that marital relations are sinful while others said they are not? What dangers threaten those who abstain from marital relations beyond their abilities during the fasts?

Other points covered in this talk include: the Churchâs condemnation of those who taught that the pleasure associated with drinking wine, eating meat, and having marital relations is evil; why certain monastic saints have felt compelled to speak on this delicate topic; the tragic example of a spiritual father who encouraged a married couple to live as brother and sister; and how the undiscerning reading of monastic books can cause many problems in a marriage.

How Can I Learn God's Will?