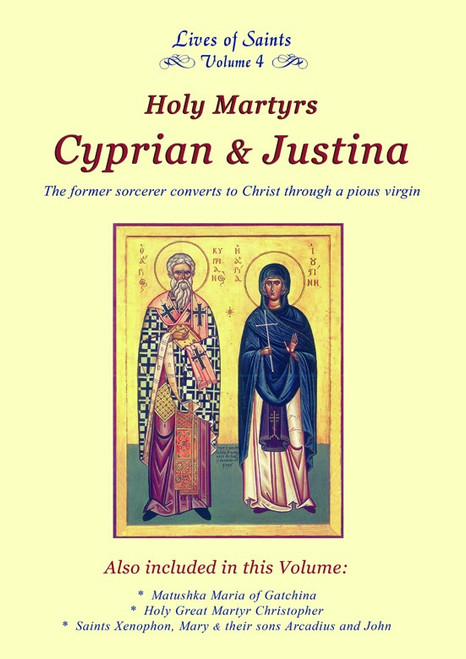 The Holy Martyrs Cyprian & Justina: In recent decades there has been much interest and participation in witchcraft and sorcery.Â  Some believe it to be a myth only seen on television or found in books.Â  Others, however, are involved in actual contact with demonic powers, harming their own souls.Â  The life of these two Saints gives the Orthodox Christian a clear example of the Churchâs teaching on sorcery, dispelling any confusion regarding this most serious matter.Â  Saint Cyprian himself was a former leading servant of the demons.Â  His example is the surest proof that Godâs mercy and forgiveness is stretched out even to the most lost of souls.Â  These holy martyrs are especially prayed to for help against witchcraft.

Matushka Maria of Gatchina: This sick, clairvoyant nun who consoled those who came to her for guidance, was martyred under the Communist yoke in Russia.Â  She helped and continues to help people that have fallen into depression.Â  She said, âDepression is a spiritual cross; it is sent to help the penitent who do not know how to repentâ¦.âÂ

The Holy Great Martyr Christopher was a handsome, strong and powerful soldier who was greatly admired by pagan women.Â  When he came to know Christ, he prayed to God to make him ugly because his handsome looks were a cause of temptation.Â  Saint Christopher is recognised as a patron of travellers.

Saints Xenophon, Mary and their sons Arcadius & John were a God-fearing family who kept the commandments of Christ.Â  When Holy Xenophon sent his two sons to Beirut to study law, they were shipwrecked and separated.Â  Not knowing whether they were alive, the pious parents went in search for their sons.Â  This touching story demonstrates clearly how the Lord guides most wonderfully the destinies of those who believe in Him.