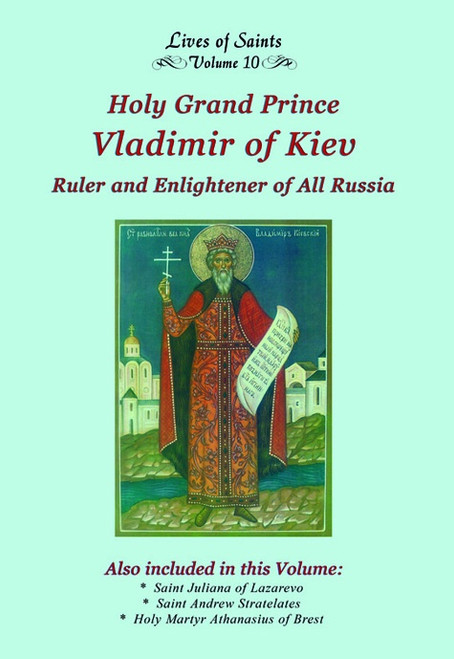 Grand Prince Vladimir of Russia: Saint Vladimir was like many people today: he sought the one true religion. His representatives investigated Judaism, Islam, and Roman Catholicism, before becoming convinced that Orthodox Christianity is the True Faith. He became blind before his Baptism, but regained his sight after accepting Baptism; likewise, his spiritual blindness was cured, and he went from being an inhuman tyrant to being a compassionate Christian ruler. He has the title of âEqual to the Apostlesâ for converting the ancient Russians to Christianity.

Saint Juliana of Lazarevo:Â  This is one of very few detailed lives of a married saint.Â  This life demonstrates that one does not have to enter a monastery in order to be saved, but that one can become a saint while married.Â  Saint Juliana was a housewife who had several children and managed a large home.Â  She attained holiness through her piety, faith, humility, and great care for the poor and sick.Â

Saint Andrew Stratelates:Â  A senior officer in the Roman army, St Andrew was also a secret Christian.Â  He won many battles by asking for Christâs help, for which reason those who were jealous of his success betrayed him to the governor.Â  Foreseeing his martyrdom, he was baptised together with 2,593 of his soldiers and then fled to another region to pray.Â Â

Saint Athanasius of Brest: Uniates are Roman Catholics that disguise themselves as Orthodox Christians.Â  Saint Athanasius was a zealous defender of the Orthodox Church in the struggle against the Latin Unia.Â  He printed religious material, the writings of the Holy Fathers, and works about this false union.Â  He endured inhuman torture, both physical and psychological, at the hands of the Papists.Â  The Roman Catholic Church still uses Uniates in attempting to subject Orthodox faithful to Papal authority.