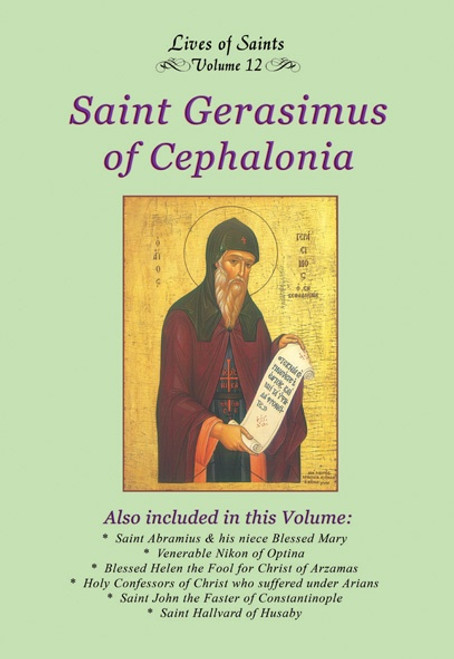 Saint Gerasimus the New of Cephalonia: Saint GerasimusÂ  (â 1579) was a Greek monk who spent much of his life travelling throughout the East seeking perfect solitude and quiet, so that he could be alone with God. He finally settled in Cephalonia, where he was asked to become the founder of a convent for young women who wished to dedicate their lives to their true Bridegroom, Christ. Even during his lifetime he began to perform miracles, and he continues to work miracles to this very day for all who turn to him with faith.Â

Saints Abramius and Mary: a very moving account of a young woman, who lived a very pious life, but later, fell into a life of prostitution.Â  Her uncle, Saint Abramius, left his life of solitude in an attempt to bring his niece to repentance.

Elder Nikon of Optina (1888-1931) received his spiritual birth and training in Optina under the guidance of Elder Barsanuphius.Â  Although cast out of the Optina monastery by the Communists, he continued to carry the cross of eldership, despite enduring exile, imprisonment and persecution.

Saint Helen of Arzamas was forced by her parents to marry.Â  However, on the very day of her wedding, she began to lead the difficult life of a fool-for-Christ.

Holy Confessors of Christ who died at the hands of the Arians: The holy clergymen who were imprisoned and exiled because they refused to enter into communion with the heretical Arian bishop.

Saint John the Faster was a man of prayer and wonderworker.Â  He was chosen as patriarch, but although unwilling to accept at first, was later overawed by a heavenly vision.