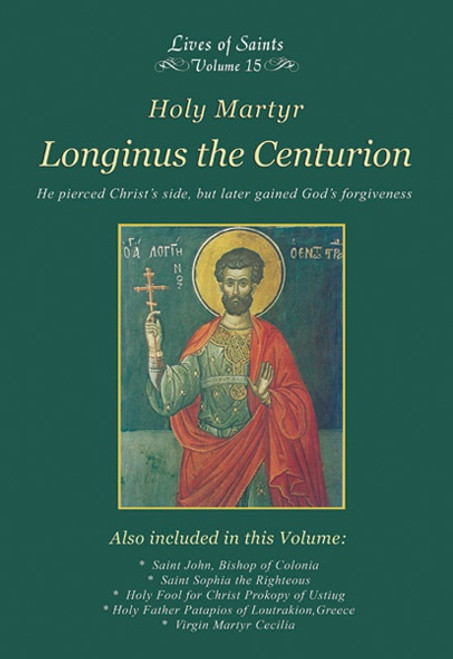 Holy Martyr Longinus the Centurion: Saint Longinus is the soldier mentioned in the Gospel who stood at the foot of the Cross during the suffering of our Saviour, and exclaimed âTruly, this was the Son of Godâ (Matt. 27:54).Â  Church Tradition adds that Longinus was the soldier who thrust his spear into the side of the Lord.Â  His life is a prime example of the depths of Godâs mercy; that even he who pierced His divine side was able, through repentance, to gain forgiveness and to be saved.Â

Saint John of Colonia was a holy bishop who hid as a monk to gain humility.Â  He was guided by Saint Sabbas of Jerusalem.Â

Saint Sophia the Righteous was a holy mother of six children.

Holy Fool for Christ Prokopy of Ustiug: the former Roman Catholic who became a Saint through foolishness.

Holy Father Patapios of Loutrakion was a great ascetic who cured cancer and other sicknesses.Â  His incorrupt relics are found in a monastery in Loutrakion, Greece.

Virgin Martyr Cecilia: Even though she was forced to marry, she preserved her virginity by threatening her pagan husband of punishment by the hand of an Angel.