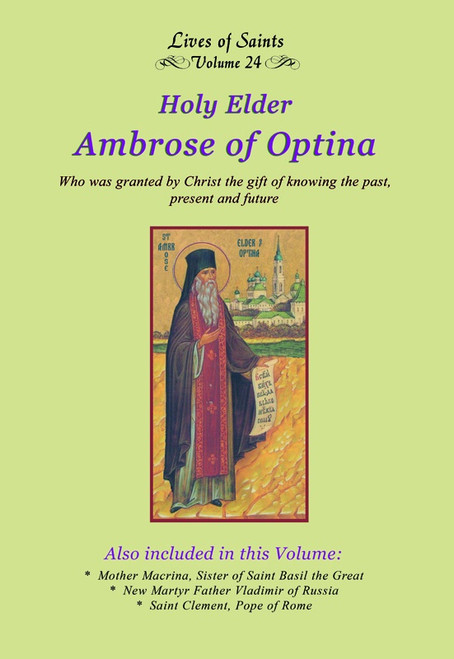 Holy Elder Ambrose of Optina: Elder Ambrose is the most famous ofÂ  Russiaâs Optina Elders.Â  Because of his great humility, the Lord blessed him with spiritual gifts by which to heal suffering souls.Â  He could see the past, present and future of people, and hundreds flocked to him daily to receive his blessing, prayers and help in their spiritual struggle.Â  He asked, âWhy do men sin?â and also gave the answer, âEither because they do not know what they should do, or, if they do know, they forget; and if they forget, they are slothful and despondentâ¦.Â  This is why we pray to theÂ  Queen of Heaven:Â  O All-holy Theotokos my Mistress, with thy holy and omnipotent entreaties drive from me, thy servant, despondency, forgetfulness, foolishness, negligence, and all vile, wicked and bad thoughts.â

Holy Mother Macrina, Sister of Saint Basil the Great inspired and encouraged her brother to devote himself to the service of God.Â  It was largely through her holy influence that many of her other brothers and sisters (many glorified as saints of the Orthodox Church) also devoted themselves to a life in Christ, and she herself lived as a nun with her mother and a number of pious virgins desiring the spiritual life.

New Martyr Vladimir of Russia did not deny his priesthood under the atheists, but continued to preach fearlessly until he was killed.Â  Even after his death he performed miracles and turned people away from Communism.Â

Saint Clement, Pope of Rome: Separated from his family from very young, he was reunited with them by the Apostle Peter in a miraculous way.Â  Due to his virtuous life, he was made a bishop and was martyred for Christ.