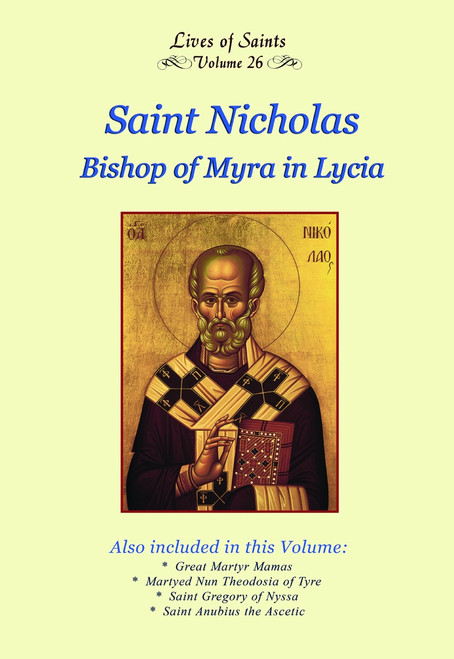 Saint Nicholas, Bishop of Myra of Lycia: Saint Nicholas the Wonderworker is one of the most venerated saints in the entire Orthodox Church. He defended the Orthodox Faith, helped the poor, freed the wrongly accused, gave safe passage to those who travelled, and everywhere cared for his flock. Even now he helps all those who turn to him in faith.

Saint Mamas was orphaned when his parents were martyred for Christ, and he himself followed their example by receiving a martyrâs crown. While living in the wilderness before his martyrdom he attained such holiness that he lived peacefully with wild animals, just as did Adam in Paradise, even talking and communicating with them. He is the patron saint of shepherds and is prayed to when animals become sick.

Holy Martyr Theodosia was a nun in eighth-century Constantinople who bravely defended the veneration of the holy icons at a time when they were being fiercely persecuted. She received the double crown of virginity and martyrdom, and grants healing to those who turn to her with faith.

Saint Gregory of Nyssa, the younger brother of Saint Basil the Great, initially preferred to study worldly subjects rather than the Faith. In time, however, he became a bishop and participated in the Second Ecumenical Council. He was one of the greatest Fathers of the Church, and his many brilliant works continue to be studied by many to this day.

Saint Anubius was a desert father who lived a perfect Christian life from the time he began to pray to Christ. He taught that all who keep Godâs commandments would themselves find joy in Heaven.