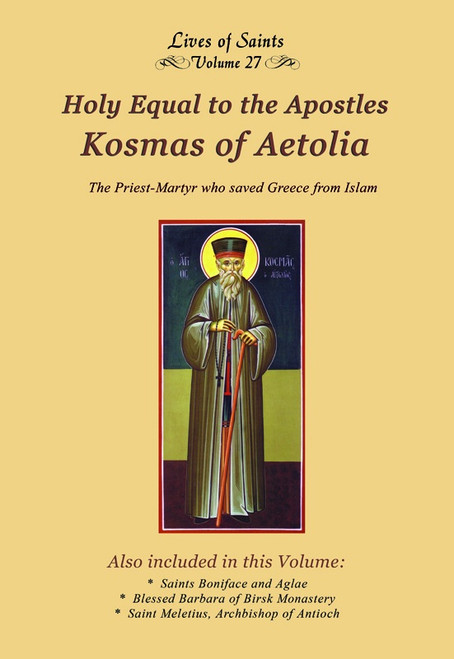 Holy Equal to the Apostles Kosmas of Aetolia: Although a monk who had vowed never to leave his monastery on Mount Athos, he could no longer bear to see his fellow Greek Christians converting to Islam through either fear or convenience.Â  Reading this life, the reader accompanies the saint on his journey through Greece.Â  His sermons and miracles brought many back to the Orthodox faith but also resulted in his martyrdom.Â  His prophesies still astound many to this day.

Holy Martyr Boniface & Saint Aglae:Â  Saint Boniface, both Aglaeâs slave and lover, sincerely desired to correct his life of sin, while his mistress had no desire to cease from indulging in her passion. That which is impossible to man, however, is possible to God, as this life demonstrates.

Blessed Nun Barbara the Sufferer:Â  Barbaraâs wicked sister-in-law, provoked by jealousy, used sorcery to inflict suffering on the blessed one that lasted all her life.Â  Events of this sort are rampart in our own day, but we see in this life that God can turn any misfortune into a means of salvation.

Saint Meletius:Â  During a time when both Orthodox and Arians were competing for dominance within the Church, the Arians elected Saint Meletius as Patriarch inasmuch as they imagined that he was one of them. The saint, after becoming Patriarch, demonstrated that he was Orthodox by denouncing the teaching of Arius.