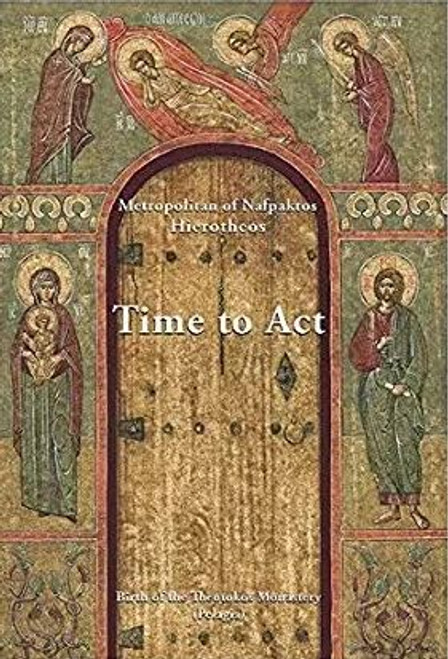 This book throws light on the dialogue between the Orthodox theological tradition and the various religious and philosophical systems originating from both East and West. It is offered to our fellow Christians, Orthodox and non-Orthodox, so that they can follow the encounter between Orthodox theology and other philosophical and religious points of view, as well as deepening their knowledge of the Church’s traditional teaching on the inner life of spiritual vigilance.

Published thirty years ago in Greek to counter the various trends coming into Greece from outside, this book, newly translated into English, is now moving in the opposite direction, travelling from Greece to the East and the West to speak to all those who long to overcome death and find eternal life.

The title Time to Act signifies the urgent need for all of us to experience the Orthodox tradition for ourselves, and not just to talk and read about it. This is the most potent safeguard for Christians in the times ahead.

Time to Act is divided into ten sections:

Eastern Religions and the Orthodox Church looks at religious movements thriving in the West. “Most of those who turn to these movements are motivated by spiritual interests and are looking for a way to acquire inner peace,” but they do not find the therapeutic method that leads from self-love to real love, which is the way to true peace.

Traditional Catechism considers the state of human beings before the Fall, and offers fascinating interpretations by the Fathers of the nature of Paradise and the trees it contained: “The whole creation of this visible and sensible world was made as a Paradise, before the Paradise that was prepared and planted for Adam and Eve. After creating the world from non-being, God created Paradise. Because God foresaw the Fall of man, the world was created before this Paradise, so that man would be able to live in this world as in a second Paradise…”

The Search for Purification considers how the Fathers speak about cleansing the heart.  “Contemporary Eastern-style religious movements have a lot to say about acquiring knowledge of God and inner calm, without stressing the essential precondition: purification of the heart.”

The Prayer of the Nous in the Heart is the basis of spiritual life, but we need guidance. “Many dangers arise during prayer. I should like to draw particular attention to four major risks…” “Noetic prayer is not a mechanical method of repeating the Jesus Prayer, after the manner of Buddhists, but it is practised in an atmosphere of repentance and humility.

God’s Way of Education “is the comings and concealments of uncreated grace, and all the knowledge about God and eternal life that is offered to those who accept them.” “According to St Macarius, someone who has not passed through these stages cannot be considered a Christian. When he has passed through them he becomes a Christian. It is even less possible for someone to be considered a priest or spiritual father if he is unaware of how divine grace comes, is concealed and comes anew.”

Experiencing Deification (Living Theology) presents theology as life and experience. Even today there are Fathers who behold God and are bearers of the Orthodox tradition.  The author analyses passages from St Silouan the Athonite “so that we can see for ourselves that there are witnesses to Christ’s Resurrection in every age.” “The path leading to deification is associated with blood-soaked sacrifices and many great sufferings.”

Testimony to Martyrdom: The Ethos and Voice of the Crucified focuses on the struggle of the Church against the devil as “an inner battle for domination. Every hour is the last hour, and every moment is a moment of victory and triumph.” This war is waged not only by the Church, but by every Christian. “Martyrdom is the rule in the Christian life.” “This is where we differ from Buddhism. Buddhists avoid suffering; we pursue it, because it does away with sensual pleasure and death. According to St Maximus the Confessor and St Mark the Ascetic, ‘Whoever loves God must also love suffering.’”

An Orthodox Presence records the author’s impressions of his first visit to the Monastery of St John the Baptist in Essex in England in 1976. He describes the Elder of the Monastery, Archimandrite (now Saint) Sophrony, the monks and their daily routine. All Orthodox monasteries, including the one in Essex, which function within the Orthodox ecclesiastical environment, proclaim the truth that the Church’s hesychastic and neptic tradition is not simply stored up in books, but is a living reality.”

Pastoral Guidance of Penitents according to St Basil the Great demonstrates the value of the holy Canons and their function within the Church, using the canonical ordinances of St Basil the Great as a starting point.  The holy Canons are not legal texts; their aim is to help Christians progress from sickness to health, from servitude to the true freedom of an illumined nous.

St Hierotheos, Bishop of Athens looks at the basic elements which constitute saintliness and express it, as illustrated by the figure of St Hierotheos, who was a disciple of St Paul, Bishop of the Church of Athens, teacher of St Dionysius, and a hymnographer and writer. The goal and purpose of human beings is deification. “We were not created in order to become good people, but to become saints, to progress from being in God’s image to being in His likeness.”

Commentary on the Holy Scriptures of the New Testament, Vol. 2: The Acts of the Apostles

The Acts of the Apostles: Spreading the Word

The Kursk-Root Icon: A Miracle in Our Times

Orthodox Psychotherapy: The Science of the Fathers

The Mind of the Orthodox Church