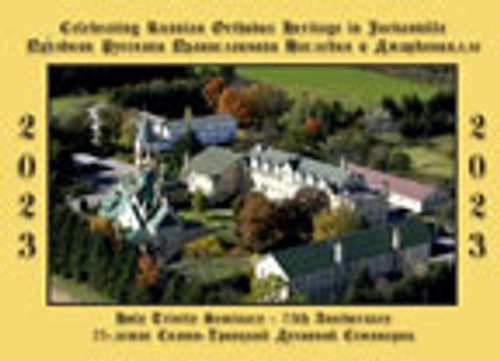 Dear  Brothers and Sisters, beloved in the Lord,
Esteemed Benefactors of the Russian Orthodox Youth Committee!

By His great mercy, the Almighty Lord preserved us during these difficult times and vouchsafed us to see the coming of the new calendar year 2023. We pray the Lord gives each and everyone of  you health and strength both spiritual and physical, and peace,  serenity and prosperity to our blessed Fatherland and to every Orthodox Russian, wherever they dwell in this new “favorable year of the Lord” (Isaiah 61; 1-2, Luke 4:18).

This year, our calendar is dedicated to a very special date in the history of the Russian Orthodox Church Abroad, and indeed in the entire Russian Orthodox Diaspora: the 75th Anniversary of the Holy Trinity Seminary, which was established within the Lavra of the Russian Diaspora - the Holy Trinity Monastery in Jordanville, New York (USA).   Our seminary owes its existence, first of all, to the work of the ever-memorable Archbishop Vitaly (Maximenko), who became its first rector, and Professor Nikolai Nikolaevich Aleksandrov, its first dean.  By the decree of our Synod of Bishops dated September 30/ October 13, 1948, a blessing was given to open  the seminary “for  the  training of monastic and white clergy”, and on the very next day,   October 1/14, 1948,  the first semester was begun for its first students....  The history of our seminary is an integral part of the history of our Russian Church Abroad. Let us only recall that among its graduates were our ever-memorable First Hierarchs - Metropolitan Laurus and Metropolitan Hilarion. Vladika Lavr, having arrived at the Holy Trinity Monastery as a young monk in 1946, carried on his earthly duties here: first he studied at the Seminary, later he taught there, and he remained the Seminary’s rector for 32 years until his blessed death in 2008 as Metropolitan of ROCOR.  Metropolitan Hilarion also arrived as a novice in Jordanville, studied at the Seminary, carried out obedience in the monastery printing house and in other jobs, until he was called to the bishopric, becoming in 2008 the Metropolitan of Eastern America and New York until his death in the Lord in 2022. Needless to say that from the very beginning, the main business of the Seminary has been and remains the training of clergymen, who will have to feed our flock living outside the Fatherland.

The Calendar for 2023 contains brief information about the Holy Trinity Seminary, as well as  photographs of the monastery, its inhabitants and the seminarians taken in different years.