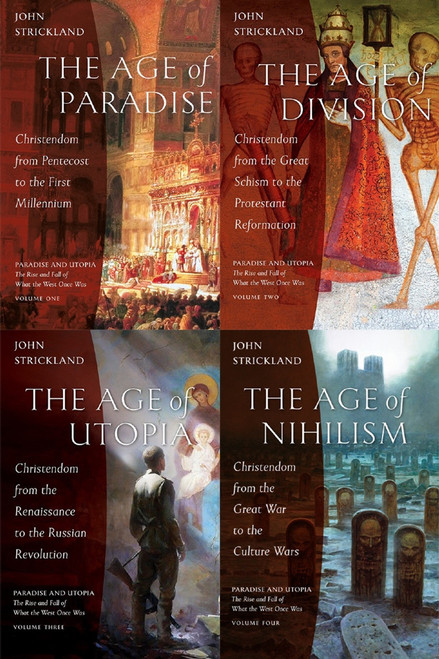 Includes the complete four-volume history of Christendom by John Strickland.

"Before there was a West, there was Christendom. This book tells the story of how both came to be." (from the Introduction)

The Age of Paradise is the first of a projected four-volume history of Christendom, a civilization with a supporting culture that gave rise to what we now call the West. At a time of renewed interest in the future of Western culture, author John Strickland—an Orthodox scholar, professor, and priest—offers a vision rooted in the deep past of the first millennium. At the heart of his story is the early Church’s “culture of paradise,” an experience of the world in which the kingdom of heaven was tangible and familiar. Drawing not only on worship and theology but statecraft and the arts, the author reveals the remarkably affirmative character Western culture once had under the influence of Christianity - in particular, of Eastern Christendom, which served the West not only as a cradle but as a tutor and guardian as well.

If you have ever wondered exactly how we got from the Christian society of the early centuries, united in its faithfulness to apostolic tradition, to the fragmented and secular state of the West today, The Age of Division will answer all your questions and more. In this second of a four-volume cultural history of Christendom, author John Strickland applies insights from the Orthodox Church to trace the decline and disintegration of both East and West after the momentous but often neglected Great Schism. For five centuries, a divided Christendom was led further and further from the culture of paradise that defined its first millennium, resulting in the Protestant Reformation and the secularization that defines our society today.

Continuing the epic of Christendom told in earlier volumes, The Age of Paradise and The Age of Division, the author explains how, between the Italian Renaissance of the fourteenth century and the Russian Revolution of the twentieth, secular humanism displaced Christianity to become the source of modern culture. The result was some of the most illustrious music, science, philosophy, and literature ever produced. But the cultural reorientation from paradise to utopia—from an experience of the kingdom of heaven to one bound exclusively by this world—all but eradicated the traditional culture of the West, leaving it at the beginning of the twentieth century without roots in anything transcendent.

In this final volume of the series, John Strickland tells the story of Christendom’s most tumultuous century. As nihilism began to cast its menacing shadow on the eve of the First World War, a self-styled "antichrist" named Friedrich Nietzsche and an obstinately Christian Fyodor Dostoevsky both offered ominous visions of what the West would become if "God is dead" and any moral act thus becomes permissible. Though total warfare seemed to confirm such predictions, a project arose in its wake to rebuild utopia with secular ideologies that, in the case of Nazism, opened the abyss even further. Communism and liberalism were left after the Second World War to compete for ultimate preeminence, but both would ultimately fail to replace the lost transcendence of the West’s deep first-millennium past. As the twenty-first century opened, utopia was as elusive as ever, and a culture of paradise once again beckoned to a civilization exhausted by centuries of secularism.

The Great Book of Needs: Expanded and Supplemented. Vol. 4

Theology of the Icon (2 book set)

Christianity or the Church?