Exodus: St John Maximovitch Leads His Flock out of Shanghai 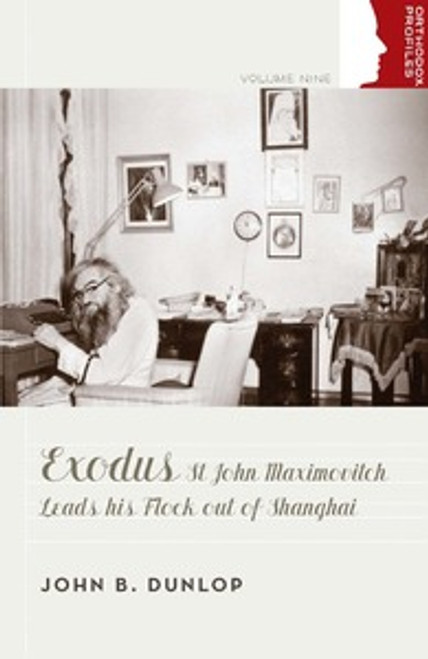 Exodus: St John Maximovitch Leads His Flock out of Shanghai

As interest in St John keeps growing with Russian, with many publications appearing in the saint’s native language, John Dunlop’s excellent book fills a much needed void in English. Having had the good fortune of being born in Shanghai to devout Orthodox parents in 1934, and to serve St John in his cathedral between 1940 and 1948, I witnessed some of his miracles and experienced the power of his incessant prayers throughout my life.”

St John Maximovitch (1896–1966) is loved and venerated throughout the world. Born on the eve of the Communist Revolution, he was a leading figure in the Russian diaspora, serving the Church in Yugoslavia, China, the Philippines, France, and the United States. His sanctity, asceticism, and wonderworking are well known from several different published versions of his life.

In Exodus, readers discover more about St John’s role in sustaining his flock in Shanghai, arranging for their flight to Tubabao, and his successful efforts to lobby the U.S. government, which allowed thousands of refugees and orphans to emigrate to America. Drawing extensively on unpublished primary sources—letters, memoirs, interviews, newspaper articles from key figures and eyewitnesses—John B. Dunlop takes readers on an exciting journey, as they learn more about both St John and his émigré flock.

John B. Dunlop is an emeritus senior fellow at the Hoover Institution. He has written extensively on the political and religious his­tory of Russia. He is the author of many books and articles, including The Rise of Russia and the Fall of the Soviet Union (Princeton University Press, 1995) and Starets Amvrosy (Nordland, 1972).

Sermons and Writings of Saint John of San Francisco: Book 1