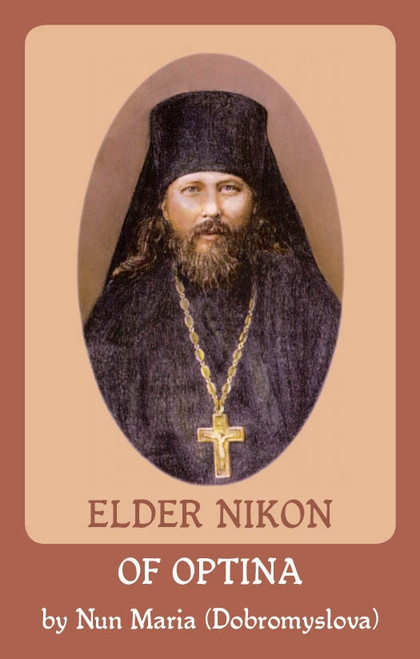 The Elders of Optina Monastery have had a tremendous impact on Russian society, calling forth a nationwide blossoming of sanctity. During the course of a century, their prophecy and God-illumined counsel attracted spiritual seekers from far and wide.

Elder Nikon (Belyaev) (1888–1931) was the beloved disciple of Elder Barsanuphius of Optina for over five years, during which time he assimilated his spiritual father’s sanctity and teachings to such a degree that was later able to take on the labor of eldership himself. Fr. Nikon kept a spiritual journal detailing his relationship with Elder Barsanuphius, giving us a valuable view into how eldership is passed on. His humble acceptance of God’s providence at all times enabled Fr. Nikon to maintain his spiritual equilibrium no matter what the circumstances—and his lot was to be a difficult one. After the closure of Optina Hermitage as a monastery by the Soviets in 1918, he was the last hieromonk to continue serving there in the one open church until its final closure in 1923. Elder Nikon then began his ministry of eldership in the town of Kozelsk, where he settled with other Optina monks, and continued selflessly serving those around him until his arrest in 1927 and his exile to Russia’s far north, where, in poverty and sickness, with uncomplaining trust in God, he reposed in 1931.

The Life of Elder Nikon is particularly appropriate for our times, as the decline of the collective West into a Soviet-style dystopia mirrors the tragedy that overtook Orthodox Russia a century ago. Elder Nikon’s words of counsel on how to maintain faith, as well as his own example of confessing Christ in the face of persecution, are as needful for us today as they were during his own lifetime.