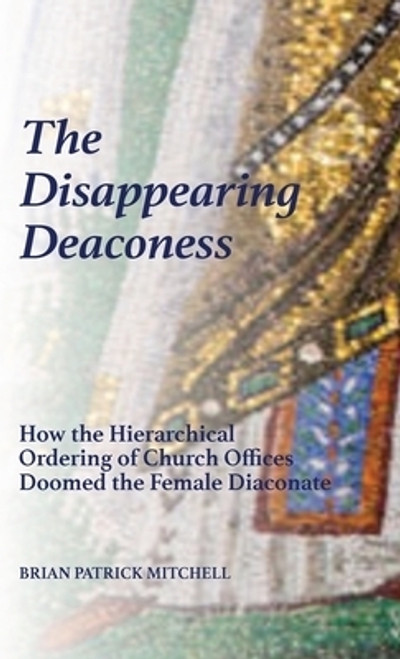 How the Hierarchical Ordering of Church Offices Doomed the Female Diaconate

For all the recent research on deaconesses in the early Church, we still know very little about them, for two reasons: First, their duties were very limited, so there isn't much said about them in ancient texts. Second, their presence was also very limited: There weren't many of them anywhere outside Constantinople. In many places, there weren't any at all, and for a long time, there weren't any anywhere in the Orthodox Church. Why?

The Disappearing Deaconess examines not just the evidence of their existence but also patristic teaching on male and female and the evolution of various ministries in the early Church to conclude that the office of deaconess was inherently problematic for early Christians because it appeared to elevate women over men in the hierarchy of the Church, contrary to Christian beliefs about both the natural order and the divine economy. The book first summarizes what is known about deaconesses in the early Church, weighing various explanations for their decline and disappearance, then it surveys early Christian teaching on gender to provide a broader context for understanding the female diaconate before tracing the hierarchical evolution of Church organization-from the many more or less informal offices mentioned in the New Testament to the emergence of the clerical orders we know today, with increasing emphasis on the distinction of clergy and laity leading to the concept of "hierarchy" as understood by the sixth-century writer known as Dionysius the Areopagite.

Light of the World: Prayers to Our Lord and Savior Jesus Christ

Saint Nikolai Velimirovic: On the Incarnation