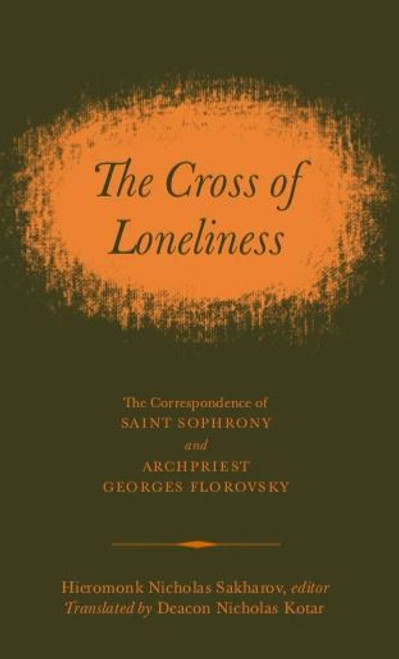 The Cross of Loneliness presents the first English translation from Russian of the correspondence between Saint Sophrony and Archpriest Georges Florovsky from 1954 to 1963. Rev. Dr. Alexis Torrance, Associate Professor of Byzantine Theology at the University of Notre Dame, illuminates in his introduction the “cross of loneliness” to which St. Sophrony and Fr. Georges refer in their letters as they lament the loss of an Orthodox theological culture in which life and dogma are joined in a deep and conscious union.

The letters themselves discuss the publication of the first English edition of Saint Sophrony's book on Saint Silouan the Athonite (The Undistorted Image, 1958). He requests Florovsky's assistance in finding a publisher and writing an introduction after the untimely death of their mutual friend, V.N. Lossky, who had originally been engaged for this purpose. Later in the correspondence they discuss the issue of the Filioque, the doctrine of the Trinity, church hierarchy, and "despotism" among other theological and ecclesiastical matters. The letters conclude with Fr. Georges's reflections on his trip to India and the question of union between non-Chalcedonian and Orthodox Christians. Finally, Fr. Georges's foreword to The Undistorted Image is included as an appendix.

Expanding the Limits of the Heart