The Living Witness of the Holy Mountain: Contemporary Voices from Mount Athos 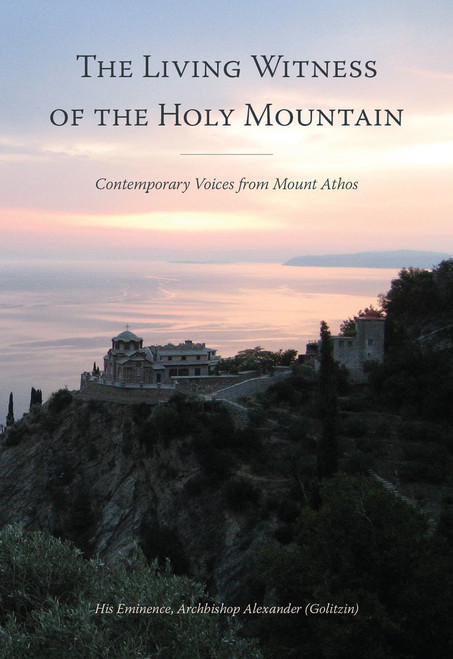 The Living Witness of the Holy Mountain: Contemporary Voices from Mount Athos

From as early as the Ninth Century, Mount Athos- a monastic republic situated on a peninsula in northern Greece extending some 35 miles into the Aegean Sea- has been a monastic center and a spiritual beacon of Orthodox world. As the present collection of essays, sermons, narratives, and apophthegmata shows, the significance of the work of the monks who come to Athos to devote themselves to God continues undiminished, as does the vitality of their contribution to the spiritual life of Orthodoxy world-wide. In these pages we see the simplicity and truth of the Gospel reflected in anecdotes of contemporary Fathers of the Holy Mountain; we read of the connection between the light of Christ's Transfiguration on Mount Tabor, and Orthodox monastic spirituality; we learn how St. Herman of Alaska, America's first Orthodox saint, was in a sense a gift of Athos to America. Several writings by Archimandrite Aemilianos (Vapheides), Abbot of Simonos Petras monastery on Mount Athos, set forth the critical importance of the spiritual father and the Jesus prayer in an Orthodox monastery, and the link between monasticism and martyrdom. A leading French Catholic scholar recounts in detail his path to Orthodoxy over a span of many years. Also included is the Tomos of Mount Athos in Defense of the Holy Hesychasts an important Orthodox doctrinal document, written in the fourteenth century by St. Gregory Palamas and signed by the elders of the Holy Mountain. These writings, together with the others in this volume, have all been written by Athonite monks; all but one of them appears in English for the first time, translated by Hieromonk Alexander (Golitzin), who contributes, in his lengthy Introduction, an examination of Athonite history, organization, and daily life.

Anchored in God: Life, Art, and Thought on the Holy Mountain of Athos

The Eros of Repentance: Four Homilies on Athonite Monasticism

The Way of the Spirit: Reflections on Life in God

Anchored in God: Life, Art, and Thought on the Holy Mountain of Athos

The Watchful Mind: Teachings on the Prayer of the Heart

Wisdom from Mount Athos: The Writings of Staretz Silouan, 1866-1938