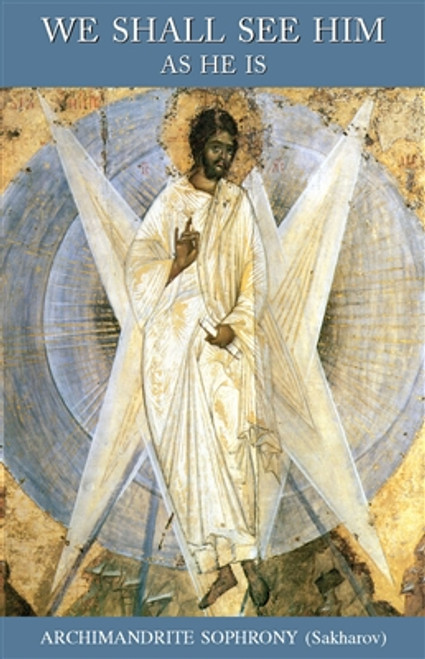 “Now at the close of my life I have decided to talk to my brethren of things I would not have ventured to utter earlier, counting it unseemly.…”

Thus wrote Archimandrite Sophrony, then ninety-two years old, in We Shall See Him as He Is, his spiritual autobiography. In this book Fr. Sophrony, one of the most beloved orthodox Christian elders of our times, revealed to the world his own experience of union with God, and the path to that union. drawing near to God with intense love and longing accompanied by struggle, self-emptying and searing repentance, Fr. Sophrony was granted to participate in the life of God Himself through His uncreated Energies. Like orthodox saints throughout the centuries, he experienced God’s grace as an ineffable, uncreated Light. It was in this Light that Christ was transfigured on Mount Tabor before His Apostles, and it is in this Light that we shall see Him as He is (I John 3:2).

Born into a Russian orthodox family in Moscow in 1896, Archimandrite Sophrony embarked on a successful career as a painter in Paris. There he delved into Eastern religions for a time, before repenting bitterly of this and returning to the faith of his childhood. After a brief period of theological study in Paris, he left for the ancient orthodox monastic republic of Mount Athos in Greece, where he spent fifteen years in a monastery and a further seven as a hermit “in the desert.” on Mount Athos he became the spiritual son of a simple monk of holy life, Elder Silouan. It was under the guidance of Elder Silouan that Fr. Sophrony experienced divine illumination, knowing God intimately as Personal Absolute—as the one Who revealed Himself to the Prophet Moses as “I AM” and Who became incarnate as man in Jesus Christ. In 1959, Fr. Sophrony founded the Monastic Community of St. John the Baptist in Essex, England, which has since become a major orthodox spiritual center for all of Western Europe. His books on the life and teaching of his elder, Fr. Silouan—published most recently in a single volume, as Saint Silouan the Athonite—led to the canonization of Elder Silouan by the Ecumenical Patriarchate of the orthodox Church in 1988. Elder Sophrony reposed in 1993, at the age of ninety-seven.

By special arrangement with the St. John the Baptist Monastery in Essex, England, the St. Herman of Alaska Brotherhood has now published the first American edition of Archimandrite Sophrony’s classic work, We Shall See Him as He Is.

O Lord, Teach Me, and I Shall Know

Seed for the Sower: Preaching Matters

Talk 14: Are We Seeking Salvation or Are We Deceiving Ourselves and Others?

Talk 48: Blessed Are the Merciful, For They Shall Obtain Mercy!

Sermons by Saint Gregory Palamas: The Saving Work of Christ