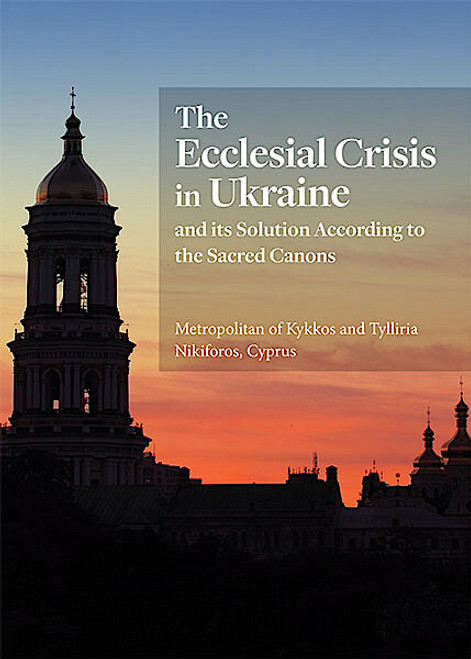 and its Solution According to the Sacred Canons

by Metropolitan of Kykkos and Tylliria Nikiforos

This is essential reading for all Orthodox believers to better understand what the Ukrainian crisis means for the future of their Church. It will also assist others to see beyond the characterization of the crisis as a political event in the context of relations between Russia and the West. It makes clear that at its heart this is an ecclesiological dispute calling out for a conciliar solution.

In the autumn of 2018 the Russian Orthodox Church broke communion with the Ecumenical Patriarchate of Constantinople following the latter Synod's announcement of their intention to create an autocephalous Orthodox Church of Ukraine (OCU). In December of that year a formal council was convened in Kiev and this new ecclesial body was created from two Ukrainian groups previously considered schismatic by all of the Orthodox churches worldwide. All of this transpired without any attempt by the Ecumenical Patriarchate to seek a consensus of all the Orthodox churches before embarking this course of action.

More than two years later the newly created OCU remains unrecognised by the overwhelming majority of the world's Orthodox believers notwithstanding that it has in that time been been recognised as Orthodox by the Patriarchate of Alexandria and the Churches of Cyprus and Greece. But even this recognition has not been without significant dissenting voices.

Among these is the Abbot of the renowned Kykkos monastery in Cyprus, Metropolitan Nikiforos. In this pithy text he eloquently explains why the actions of the Ecumenical Patriarchate have created a schism in the Orthodox Church worldwide and how in turn they reflect the promotion of a new ecclesiology that distorts the traditional understanding of the Orthodox Church as headed only by Christ Himself. He is clear that the only road to healing and unending schism is a return to a form of inter-Orthodox relations which respects both conciliarity and hierarchy. In doing this he stresses his utmost respect for the historical place of the Ecumenical Patriarchate of Constantinople and the hope that it will turn back from the path it is currently on to resume its rightful place in the plurality of the Orthodox Church.

Crisis in Byzantium: The Filioque Controversy in the Patriarchate of Gregory II of Cyprus (1283-1289

The Truth About the Russian Church Abroad

A Ray of Light: Instructions in Piety and the State of the World at the End of Time