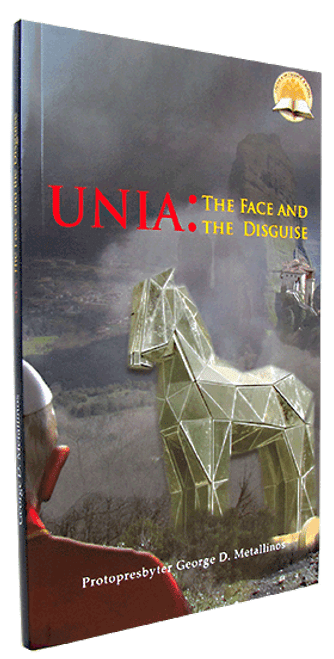 Now in circulation is the English edition of the book “UNIA: The Face and the Disguise” by Protopresbyter Fr. George Metallinos, Professor Emeritus of the Athens University School of Theology. This new edition is included in the publications of the Christian Orthodox Philanthropical Society of Friends of the Sacred Retreat of Pantokrator at Melissohori “Saint Gregory Palamas”.

In this very notable essay, Father George examines the historical course and the significance of the religious-political entity named “Unia”, that is, of the Papist communities in the Orthodox regions of Eastern Europe and the Middle East – mainly during the past four centuries – who have deceptively been observing the Orthodox liturgical rubric (sacred services, language, vestments, etc.), but have acknowledged primacy and infallibility in the person of the Pope of Rome.  The author analyzes Unia’s early link to the Papist “Holy Inquisition”, but also to the Jesuits, who had originally organized Unia as a disguised Latinism.  According to Fr. George, Unia was –on the one hand– a factor that balanced out the damage sustained by Papism on account of the Protestant Reform from the 16th century onwards, and on the other hand, it was also a lever that elevated the Pope as a universal Bishop, whose prestige is supposedly recognized not only in the West but also in the East, that is by the Uniates, who are a mere semblance of “Easterners”.   Unia exploited various favourable coincidences, such as the financial adversity that prevailed in various countries as well as schisms, but, par excellence, it exploited the support of Roman Catholic Governors, to impose itself en masse or even with force on Orthodox populations.  The strengthening of Unia was nothing short of the continuance of the Papacy’s medieval struggle for dominance (Investiture Controversy), for the implementation also of political and not only ecclesiastic authority by Rome.  It was the Pope’s oppression of the Orthodox through Unia that made the Orthodox of Eastern Europe turn to Russia during World War II - the same time during which the Uniates were collaborating with the German Nazis.

The Professor of Ecclesiastic History especially focuses on the emergence of Unia in the region of Greece and the reaction of the Ecumenical Patriarchate and the Church of Greece, as well as -for example- the successful proselytism to Unia of the destitute Asia Minor refugees, through Uniate “philanthropy”. The upgraded (with Cardinals) status of Unia by the Vatican, both in the Ukraine and the broader area during the last decades, but also the Vatican’s stance on the ethnic and ecclesiastic subject of Skopje’s pseudo “Macedonia” and the wars of former Jugoslavia, prove that the problem of Unia is not one of the past. The Vatican’s persistence in preserving and strengthening Unia despite the reactions of the Orthodox, but also of many important Papist personages – and in spite of the damage to the ecumenist “dialogue of love” – proves that Unia continues to this day to be extremely precious to the Vatican, for the salvaging of its crumbled moral status and also for the weakening of Orthodox peoples, States and alliances (the current events in the Ukraine are most revealing).

Finally, the author analyzes the soteriological repercussions of Unia’s activity, given that by maintaining all the heretic dogmas of Papism – dogmas that were condemned by Ecumenical Councils – Unia is deemed detrimental to the prerequisites for in-Christ salvation.  The matter of Unia is no longer a hiero-canonical one, as were the instances of Rome’s encroachments over a thousand years ago in the jurisdictions of the Eastern Patriarchates; it is primarily an ecclesiological problem and should be considered as a reason for the revision and redefinition of the theological dialogue of the Orthodox with an uncompromising and aggressive Rome.  The text is also flanked by significant, related, pan-Orthodox documents.

The Aesthetic Face of Being: Art in the Theology of Pavel Florensky

The Rush to Embrace