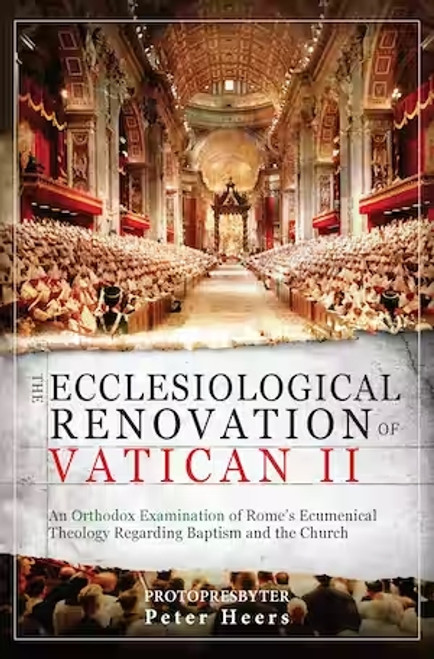 More than 50 years have passed since the Second Vatican Council - arguably the most consequential religious gathering of the 20th century - produced a new vision of what the church is and ought to be. Remarkably, in spite of the subsequent “ecumenical spring” and flurry of ecumenical activity, there has not been a thorough examination of the Council’s new ecclesiology from an Orthodox standpoint - until now. The Ecclesiological Renovation of Vatican II, first published in Greek in 2014, has already been hailed by leading Greek Orthodox churchmen as a watershed in ecumenical studies, a paradigm shift for ecumenical relations and ecclesiology, required reading for expert and seeker alike.

In 14 chapters, with more than 700 citations, both the historical and theological road leading to the new ecclesiology (part one) and the ecclesiology of the Council itself (part two) are examined thoroughly in the light of the patristic tradition of Orthodoxy. The roots of the new ecclesiology in the recent (Congar, Bea, Newman) and distant (Calvin, Aquinas, Augustine) West are unearthed and examined, thus shedding new light on the continuity, or discontinuity, of Vatican II with the Western Christian tradition. Seen in its proper historical and theological context the conciliar vision of the church is then examined in depth, compared and contrasted with the Orthodox patristic vision of the Body of Christ, revealing new horizons for both researcher and believer, participant in, and observer of, the Orthodox-Roman Catholic Theological Dialogue.

St Gregory Palamas as a Hagiorite

Apodictic Treatises on the Procession of the Holy Spirit

The Truth of Our Faith