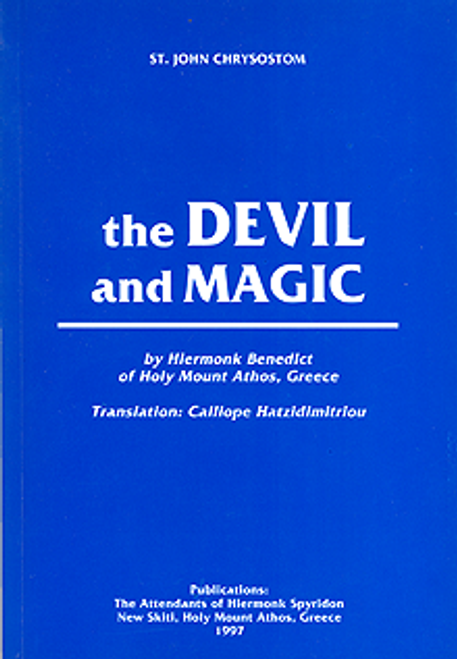 In the past few years, much has been said, not only in our country, but in other parts of the world, concerning the existance of Satan and his company.

During the past two years, specifically, all that has occured in the area of Greece convices each honest person that the existence of the devil and his group of followers is not just a simple event or an idea, as some people would prefer to believe, but a hard fact, which all of us should accept.

This volume concerns itself with this burning issue. Burning, not just for our age, but for all ages.

Saint John Chrysostom, the great teacher, sociologist, economist, educator of children, dogmatologist, interpreter of the Holy Writings, and many other things, did not omit to concern himself with the sleepless enemy of man's salvation.

In the texts which follow, he teaches us about this incorporeal force, which because of pride, fell from heaven and due to sheer envy, tempted man to rebel against God, His Father. Since then, there exists a hard and implacable war and an irreconcilable hatred. The Saint teaches us the way in which we should journey in order to execute this...a battle of many facets. He confronts those who assert that if the devil did not exist, man's salvation would be easier, and also those who contend that demons are those who govern the human sphere.

He combats those Christians who desire to belong to Christ and to the devil. Those who want to be church-goers, but who simultaneously want to visit a medium whenever some problem presents itself. That is when they abandon Christ and The Church and run to His enemies.

It appears though, that even in His time, there occured such activities which take place today. Therefore, Saint John Chrysostom's writings are timeless.

He answers those who ask "where does the devil learn some secrets and mysteries", an how have the things that "the old lady" said come true. Thus, it battles sorcery and witchcraft, and the impostor, who even in those times was at his peak.

In addition, he stresses that the wiles used by the devil and his powers of prognosis are useless before a faithful member of The Church, just as when the devil himself seems like a small, harmless sparrow when facing one who is striving for his salvation...

Thoughts and how to confront them