The Adventures of Three White Bears 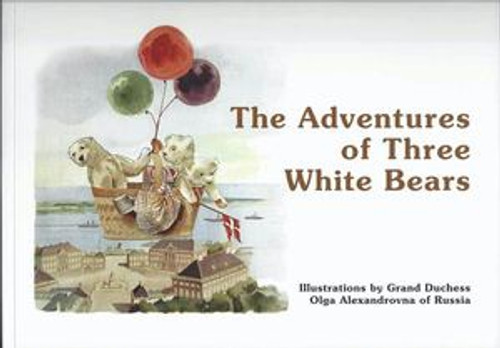 The Adventures of Three White Bears

In 1919 Russian Grand Duchess Olga Alexandrovna Romanov, a World War I army nurse and youngest sister of Tsar Nicholas II, fled the Bolshevik Revolution with her husband Col. Nikolai Kulikovsky, and their sons, three year-old Tihon and infant Gury, through the Ukraine to a refugee ship in the Crimea​.​ Their​ ​journey ended in Denmark, where they lived at the palace in Copenhagen with ​the ​Danish-born ​Empress ​Marie Feodorovna, wife of Russian Tsar Alexander III and mother of​ Tsar​ Nicholas II and Grand Duchess Olga.

In Copenhagen​ Olga painted a series of delightful watercolors to go with ​a story​ she told her young sons of a boy who lived in the Danish palace with his white toy bears. Now, for the first time, we have both the original pictures and the story itself from Olga Nikolaevna Kulikovsky-Romanov, wife of the grownup Tihon, just as Tihon ​related​ it to her.

This first English version was written by Mother Nectaria McLees, an Orthodox nun, who has never lost her own love of children’s stories. We hope that you will also enjoy this wonderful book.

Three Treatises on the Divine Images

The Three Hierarchs: Patrons of "Arts and Letters"

The Sleepy Bear and the Golden Whispers

The Lion and the Saint

Saint Sergius: A Beacon in the Wilderness of Radonezh